See this NY Times article which talks about how the increased academic pressure on Kindergarten students is leading many states to move their cut off dates earlier in the year. NYC public schools continue to have among the latest cut offs for Kindergarten, December 31, according to the allied chart. 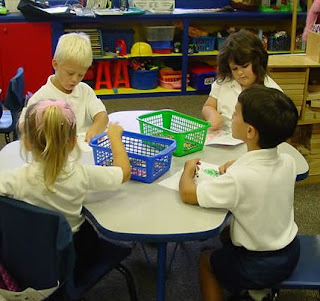 New York City private school cut off dates are much earlier; and it is very common when a child is applying to a private school, especially boys, that they suggest that they reapply the next year for Kindergarten again.
Though the red-shirt issue is mentioned only in passing in the article, the research is clear that kids who are old for their age group are far more likely to excel.  The number of professional athletes is significantly linked to their month of birth.
Here’s a good explanation of how this accumulated advantage works in sports. For example, see this article , which reveals how elite Canadian youth hockey teams are more likely to have players born early in the calendar year, a phenomenon also found among professional hockey players.

This “accumulated advantage” over time was named the Matthew effect by sociologist Robert Merton, from the Biblical quotation in Matthew: “For to all those who have, more will be given, and they will have an abundance; but from those who have nothing, even what they have will be taken away.”  The Matthew effect has also been shown in soccer, swimming, tennis, and major league baseball .


Yet relative age advantage is not only seen in sports; but in many other areas as well.  A recent study reveals how the youngest children in their grades are more likely to be diagnosed as having ADHD and to be prescribed medications such as Ritalin than their older classmates:

“From his analysis, Elder found that the youngest kindergarten kids were 60 per cent more likely to be diagnosed with ADHD than the oldest in the same grade, and also, by the time those groups reached the fifth and eighth grades, the youngest were more than twice as likely to be on prescription stimulants. Elder estimated that overall in the US, the misdiagnosis rate is about 1 in 5, that is around 900,000 of the 4.5 million children currently diagnosed with ADHD have been misdiagnosed.”

Here’s another study that shows that younger students by grade are more likely to be diagnosed with psychiatric disorders.  At age 15, they also tend to have lower test scores, are more likely to have low esteem and commit suicide in their teens, and less likely to become CEO’s as adults.
These studies collectively reveal the life-long damaging effects of the way we arbitrarily group children by age – and put excessive pressures on them to succeed .  The damage has been obviously exacerbated by the high-stakes accountability systems being imposed in schools around the country.
Posted by Leonie Haimson at 5/29/2011 01:36:00 PM

I was shocked that this Times article didn't even consider arguments that kindergarten has become too academic. That some kids are still holding a pencil with a fist is probably part of the developmental range of kindergarten, which is no longer respected by our one-size-fits all approach to early education. Is there research suggesting that damage is being done by forcing a rigid timeline of academic benchmarks further and further down in age?