Just as Bloomberg is planning on cutting millions more from public school budgets -- leading to an  loss of a thousand more teaching positions and even larger class sizes -- he appeared last night at a fundraiser for Democracy Prep charter schools, which already has four charter schools in Harlem, with more planned in the future.

This is how NYT/SchoolBook reported it yesterday:


Mayor Michael R. Bloomberg is speaking at a benefit on Tuesday night for Harlem Prep Charter School — a formerly independent charter school called Harlem Day that had its charter revoked for poor performance. In an unusual arrangement, the state allowed Democracy Prep, a charter management organization that oversees several other schools, to reopen the school with the same students and a new staff. The event is being held at a restaurant on the Upper East Side and top flight tickets go for $15,000 — the cost of educating five Harlem Prep students for one year.

Now that  is NOT really the cost of educating five Harlem prep students in one year, of course.  Actually, the city provided $16,660 per pupil in charter schools housed in public school buildings in 2009-2010,  considerably more just in public funding per student than regular public schools receive, according to the Independent Budget Office.

The IBO also concluded that the disparity between the public funding that co-located charter schools receive for each student compared to district public schools would likely be increased over time.

But that obviously doesn't stop Bloomberg from making sure that charters can raise even more private money to spend on their students, rather than the schools that he is supposed to be responsible for -- whose school budgets he has cut four years in a row.  Even without that extra subsidy of free space and services -- which we believe is illegal in state law -- the city is spending $737 million on charter schools this year alone. 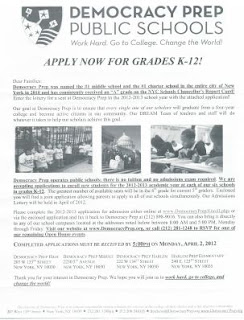 While spending on charter schools will still be increasing,  spending on  general education instruction in our public schools is projected to be cut again next year -- general education instruction by nearly $200 million, and salaries overall by $128 million,  which is predicted to lead to a loss of at least 1,000 teaching positions as well as less after school tutoring etc.  With rising enrollment, this will likely mean even larger class sizes and further damage to the quality of education that our children receive.

But never mind; Bloomberg is on the case, helping to ensure that the disparity will be even larger, and that charters will have even more resources to spend.  Perhaps this fundraiser, as well as the donation of $250,000 from the Walton Foundation (of Walmart fame) will also allow Democracy Prep to afford even more widespread mailings, including recruitment and promotional materials that this year, public school parents received as far south as zipcode 10038  -- in lower Manhattan, far from the charter chain's base in Harlem.  The Walton family is determined to do everything they can to destroy public education, and to that end gave $159 million to charter schools and advocacy groups focused on privatization in 2011 alone.

The mailer (click on above) claims that Democracy Prep was "named the #1 middle school and the #1 charter school in the entire city of New York in 2010."  Understandably, it omits the fact that in the 2011 progress reports, it is ranked as the 51st best middle school in the city -- not nearly as impressive.

Of course, even with this extra dough, Democracy Prep is unlikely to be able to afford the multimillion dollar ad campaigns of Success Academy charters, with  this steamroller chain of charters having spent $1.6 million on marketing in 2009-2010 alone; amounting to $1,300 per incoming student.  That amount has likely increased over the last two years, given their massive advertising efforts, including repeated glossy mailings to parents throughout the  city and ad campaigns in the subway stations in Brooklyn and elsewhere.


Yet in the competitive marketplace of education reform, who cares?  While the billionaires like Bloomberg and the Walton family claim to want to enlarge parent choice, what they really want is to do is ensure that charters and other forms of privatization take over the public school system, at all cost, even if it means harming our kids.
Posted by Leonie Haimson at 3/07/2012 12:13:00 PM