Yesterday the NYC Council Education committee held preliminary hearings on the mayor’s proposed education operating budget.  Here is a good report from NY1, here is the analysis of the budget by Council staff; here is my testimony [also shown below].  The proposed operating budget for next year, despite an overall increase in spending, would cut schools by another $64 million, with $182 million cut to general education instruction alone, leading to a projected loss of 2,570 teachers and even higher class sizes in the future. Meanwhile, the contract budget is projected to grow even fatter, to $4.7 billion. 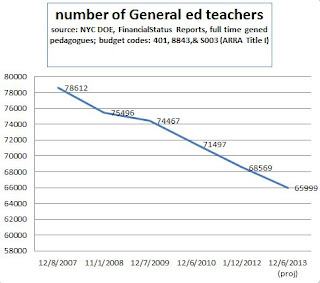 Though Chancellor Walcott kept repeating that in the final proposed budget, he expects school budgets to be flat rather than cut, even a flat budget would still likely to lead to a sharp loss in general education teachers and continued class size increases, since the costs of programs go up each year, as well as the number of special education students with mandated class sizes and services that schools have to fulfill.  We have seen a sharp fall in the number of general ed teachers in recent years, with over 2,000 lost last year alone – and according to our estimates, more than 10,000 such positions eliminated since 2007.
Many Council Members focused on teacher attrition and the effects on class size.  The DOE responded that class size increases were not their fault, but the effect of the recession, the choices of empowered principals, and anyway, they weren’t sure that class size mattered.  [See my testimony for rebuttals on all these points.]  Other topics included the ballooning contract budget, the cost and damaging impact of small schools and co-located charters, the lack of college readiness of NYC students, and whether mayoral control can finally be deemed a failure or success after ten years.
Another issue of concern was how the DOE seems still o be unable to obtain federal Medicaid reimbursement for special services, having already lost out on more than a billion dollars in funds since 2005, which would have helped offset the rising cost of special education.  The latest update is that while the city projected in this year's budget reimbursement of about $117 M, so far they have only submitted claims for about $25 million for “case management services” from prior years, and have not yet submitted any new claims. Education Chair Robert Jackson was especially concerned about where funds to fill this gap might be found. Walcott pledged to avoid further cuts to schools.
Below is my admittedly imprecise transcript of the proceedings, along with the testimony of the union heads, Mulgrew of UFT, Crespo of DC 37, and Logan of the CSA. As usual, Council members critiques were on point, and often  frustrated with the lack of responsiveness from DOE officials, although after 10 years of this, the proceedings seem a bit ritualistic. My testimony is also posted below, with more details on DOE’s misplaced priorities when it comes to education spending and class size. 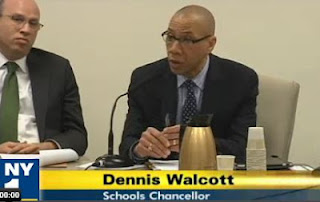 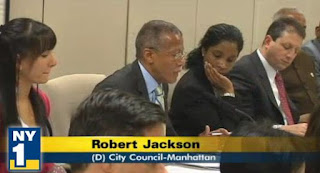 Jackson: How many ATR’s? Walcott: 850 teachers in ATR pool.  RJ: you said we would save $40M for substitutes.  Have projected savings?  Tragale: ATR rotation: we ended 1140 FY 11; 844 now.  We have saved $20M for salaries; $30M w/ fringe.  How many art and music teachers in ATR pool? Don’t know.
CM Brewer:  principals in pipeline; turnover?  Suransky: We have a consistent pattern 150 new principals each year. 5 yr grant grant from Wallace Foundation; starting to develop teachers earlier in careers as principals.
CM Lander: We need more ASD NEST programs, rather than neighborhood school having to accept all special needs kids. Suransky:  A lot of kids have different kinds of disabilities; but vast majority of kids not in autistic spectrum can be in regular classes.  We need more kids w/ disabilities in regular classes.  [But they won’t succeed in large classes we have in our schools!  ASD Nest program; class sizes capped at 14-18 students] Graduation rate of sped kids in special classes hovers around  5-6%.
Rodriguez: We need to strengthen early childhood education; Walcott says expanding Common Core into preK. What plan to put more resources in low college readiness?  Suransky: better curriculum and better quality teachers in those schools.
Walcott: repeats for upteenth time; budget will be flat, not cut.
Jackson: We should put a hiatus on new schools.  New admins & supervisors for these schools, very expensive.  Suransky: they are replacing other schools; costs even out over time.  [UNTRUE!  new smaller schools very much more expensive; greater admin costs than older larger schools phasing out.] Tragale: each new school $250K per year extra but cost over time flattens out.
Jackson: What about ATR costs for phase out schools, firing half of teachers?  Suransky: vary on quality of applicants in existing school and new applicants.  Walcott: Cannot estimate costs.
Jackson: why eliminate Nov. class size report and TCU reports; when parents care so much about this?  New Commission established will vote on whether to eliminate those reports. Did DOE put this forward proposal? Will eliminate transparency.
Tragale: Nov. class size report does not include audited info.  [Uses audited Oct. 31 audited register.] Feb. report; more accurate. [But parents need this info near the beginning of year, and Feb. report has smaller classes because so many kids drop out.] What about TCU trailer report? Neither Walcott nor Tragale seem to know anything about this.
The DOE contingent leaves.  Michael Mulgrew, head of UFT next witness. Here is his written testimony.
Mulgrew: We have lost 6700 teachers in recent years; fewest guidance counselors per student in entire state.  Why are charter schools getting a 7% increase when our schools are being cut?  We should be getting $800M reimbursement from Medicaid, with $240M on busing alone for most disabled kids; this is the easiest thing to get reimbursed for and DOE is not doing it. Teachers don’t need a signing bonus, instead we should hire more teachers to reduce class size.  We don’t need TFA and teaching fellows, who get paid a fee when our teaching colleges cannot place their graduates.  We are seeing about 2600 retirements a year and other teachers quitting; total of 4000 teachers leaving per year.  Teacher morale is  at an all-time low. Increase planned in state aid; where will that money go?
Levin:  True that DOE reached out to you for suggestions on how to do better on Medicaid?  Mulgrew: they sent a letter to us on 3 PM the day before the Medicaid hearings.  I sent back some proposals.
Santos Crespo, head of Local 372, DC 37: We only learned this fall that 642 school aides were laid off because of a $22M shortfall.  236 have been rehired; rest collecting unemployment.  DOE should use some of CityTime $500M payment to restore cuts to budget and staffing.  Wouldn’t trust DOE to properly count sock drawer.
Ernie Logan of CSA: [Written testimony here.]The Children First networks don’t work; they should restore the districts that are still in state law.  The networks and superintendents try to pass the buck about whose responsibility it is.  If a principal is ineffective the first year, he or she should have the right to remove their CFN support group, but DOE says no.  If 33 schools are failing, don’t the networks have any responsibility?  ARIS and SESIS [DOE multi-million dollar data systems] don’t work, and the only response from DOE is that ‘we’re working on it.”  Principals spend a lot of time not being helped by this technology. DOE is spending $4.7B on contractors, with no oversight.  Principals have never been able to plan ahead.  When DOE eliminated districts, also eliminated many speech provider supervisors with responsibility to see that we had enough speech therapists and who did the required paperwork.  With all the PCB’s leaking in our schools, they don’t care about our children.
Jackson: what about the proposal to eliminate the Nov. class size reports and the report on TCUs?  Logan: we should stick w/ the Nov. class size report, Oct. 31 is the audited register.  They can play around with the numbers afterwards.  They have done nothing to get rid of trailers; they are not environmentally safe or sound.  Students deserve to be in regular buildings; we should not be educating kids in trailers.  And then in Albany, the Chancellor claimed that principals “like” the trailers; not true!
Veteran principals feel mistreated and micromanaged from afar.  We believe in accountability; but the DOE is closing schools that got A’s; releasing TDR’s with flawed data and error rates of up to 70%, and telling principals that  they don’t trust their judgment when it comes to giving tenure to their own teachers.  They want to remove 50% of staff in turnaround schools, why?  As a result, many talented principals are leaving for other cities.
My testimony followed, click on the link if below is too hard to read.

When are people going to realize the closing of these schools are a danger to our children and the cost of education. Schools are not closed,only reopened with mini schools,including space for charter schools. Where there was one principal and two or three AP,we now need four or five principals and fifteen AP. Thus we need to pay for this with less teachers and programs and larger class size.