Three weeks of lost teacher time to scoring this year! 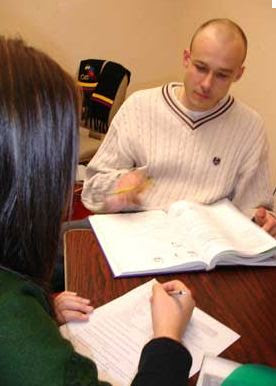 Not only will there be  six days of standardized testing this spring, with 70 minutes more in math and 25 minutes more for our poor third grade students, but there will also be three WEEKS in which teachers will be removed from the classroom to score these exams.  Unless, that is, a school can afford thousands of dollars to pay their way out of this situation, which few  can afford after years of cuts.  The DOE used to pay teachers per session (over vacation) to score these tests, but in a move a few years ago that was publicized as "cuts" to central administration, they shifted the costs to schools instead. The following is from a NYC teacher who prefers to remain anonymous:
Once again DOE is demanding that schools send teachers during the school day to grade standardized tests. This year from my school:
Three weeks of grading in April/May.
Week one: 6 ELA teachers, who will have to be replaced with paid (out of our budget) substitutes.
Week two: 6 ELA teachers, again replaced with paid substitutes.
Week three: 6 Math teachers, replaced by paid substitutes.
138 periods of class time lost each week. 900 minutes of extra help, enrichment and team planning lost each week. 72 prep periods, individual and team, lost each week.
A school can pay their way out of sending teachers ($18,000 for our school), but we have no budget for that after four years of cuts.
Questions for the DOE and the state:
Why is grading the tests not part of the contract negotiated with the testing company?
Why is grading not coming out of the profit the testing company is making, instead of out of the budget and classroom time of schools and teachers?
Are all ATR's grading?
Why can't the grading be done after school and on weekends, paying teachers with the same funds that would be used for substitutes?
How can this loss of class time, enrichment, extra help and preparation be justified?
Posted by Leonie Haimson at 3/16/2012 06:07:00 PM

The cost to the system is actually higher as they are, in addition to taking teachers out of the classroom, also paying persuasion to thousands of teachers after school hours on nights and weekend days to accomplish this task.

It is even worse. Some schools send teachers who will cost the least disruption to their school so some schools send teachers who have not taught math in many years to grade the math exam,or teachers who work only with K or 1 to grade grade 4 or 5 exams. The scoring is very subjective and very low scores are sometimes questioned and changed. I have seen the same paper receive a 4 from one scorer and a 1 from another.
This is what our Dept of ED wants to base all evaluations and school closings on. VERY SAD AND UNFAIR!!

Are all ATR's grading?

Why can't the grading be done after school and on weekends, paying teachers with the same funds that would be used for substitutes?
BECAUSE THAT WOULD MAKE SENSE!!!

We used to mark ELA and Math per session, after school. For some reason this year the powers that be at the DOE cut the number of people who marked in half with no explanation.

The grading itself is a joke. I graded the middle school English exam and was instructed not to worry about what the student didn't do -- like write coherently with proper punctuation. I was instructed to look at what the child COULD do. All of this of course mean to boost scores.