Forum on testing in District 26 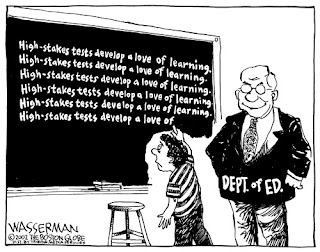 Our panelists were Randi Weingarten, President of the United Federation of Teachers, Bob Tobias, former Executive Director of Assessment and Accountability of the NYC Department of Education and current director of the NYU Steinhardt Center for Research on Teaching and Learning, and Jane Hirschmann, co-chair and founder of Time out from Testing.

We tried having a person from the Department of Education, however, their person insisted on conditions for appearing that could not be met.

There were over 150 members of the audience. Each panelist gave a presentation that was followed by a question and answer period.

We were informed that during the last five years, there has been a tremendous increase in the number of standardized tests and assessments given to our children and a vast proliferation in the ways results are used. All of the panelists explained that testing is an integral part of the education system and is necessary to determine whether or not students are understanding a given subject. However, all of them agreed that the standard tests were not designed to be used in the way that they are being used in NYC schools.

In particular, the use of these tests in determining whether a student is promoted and in evaluating an individual student and teacher’s performance was criticized and rejected as inappropriate.

It was also explained that there is no evidence that when students are subjected to more standardized tests, their efforts increase and understanding improves. Panelists also discussed: the disparity between students’ good results on New York State tests and not so good results on federally approved tests; the shrinking of curriculum so as to gear it toward test preparation; the excessive time spent on test preparation, and the monetary expenses associated with the tests.

At one point Senator Padavan spoke and said he will look into the possibility of limiting the high stakes testing by imposing limits on state funds to NYC; in a manner similar to the recent limits of CFE money for class size reduction.

In general, parents expressed equal concerns on the above matters and expressed frustration over the inability to stem the regimen of testing now imposed. In fact, a belief that the system of testing is harmful to the quality of education is held by most parents . Such is the frustration that many parents called for a student boycott of tests.

The Community District Education Council will be evaluating whether or not a boycott will be helpful to our students and if a boycott should be called and organized.

I urge you to take steps to publicize issues on testing and assessing that do not reflect only the Department of Education’s point of view. By doing so, you will be doing a tremendous service to our children.