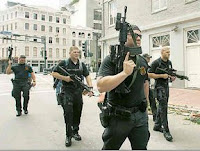 October 6, 2007 (GBN News): Mayor Michael Bloomberg today defended the no-bid contract given to Blackwater USA by the Department of Education to take over school security from the city Police Department. The Mayor said that the move was made in response to issues raised over the Police Department’s handling of school security by critics such as the NY Civil Liberties Union and NY Times columnist Bob Herbert. Nearly 2700 complaints have been received by the Police regarding school safety agents in the last five years, but the Mayor noted the success of other private companies such as Alvarez and Marsal in improving the efficiency of the school system, and said that he expected similar results from Blackwater.

Mr. Bloomberg said that President Bush himself had recommended Blackwater to Schools Chancellor Joel Klein during a meeting last week. The President was said to have told Mr. Klein that if Blackwater could take over the Iraq war so successfully from the US military, it could do the same thing for the NY City Police Department in the war against cell phones. Mr. Bloomberg told GBN News that while Blackwater security forces will not be encouraged to actually fire on students, their track record in Iraq will “certainly make those little buggers think twice before trying to bring their cell phones into school.”

In a related story, President Bush asserted yesterday that “This government does not torture people.” He went on to say that torture is a function he believes should be left to the private sector.
Posted by Gary Babad at 10/06/2007 12:12:00 AM

Is this a joke?

I began to wonder if this was a joke too - only after I sent this post on to several people, two parent coordinators and John Liu's office. In hind site, I think I responded too quickly, as I wouldn't put anything pass anyone in office.

Gary, if this is true, please verify it. If this is a joke, please don't post stuff like this without indicating in the beginning that it is a joke. Too many people are scared enough of this government.