Wrap-up of commentary on the teacher incentive pay proposal 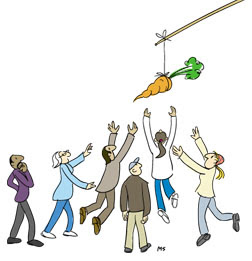 Today, lots of incisive commentary about DOE’s plan to pay teachers at schools with low-performing schools that improve on test scores. In the Daily News, Diane Ravitch questions the wisdom of this proposal, writing:
But will merit pay fix our schools? The quick answer is no. There is no evidence that students learn more because their teachers get differential pay tied to their students' test scores.
The assumption behind merit pay is that teachers are not working hard enough. Pay them more if their students get higher scores, say corporate-style school reformers, and they'll work harder. Politicians in Washington and many state capitols in both parties are attracted to the idea.
Diane goes on to argue that this particular proposal is not really merit pay, since schoolwide improvement will be rewarded, rather than the achievement of individual teachers, and then points out:
Most teachers understand that the tests now in use are imperfect measures of children's learning, which may be influenced by all sorts of external events in their lives - such as illness, disruption in their home life, emotional distress, financial worries and overcrowded classes. In effect, in its purest form, merit pay rewards individual teachers based on a single test score without regard to issues that are entirely beyond their control.
But if within every school, conditions for teachers may vary, they differ far more between schools, especially as regards class size and overcrowding.
One example: In District 1 schools on the Lower East Side, the average class size in grades K-3 is 17.6; in District 6 in Washington Heights, there is an average of 22.3 students per class. The difference is just as glaring in 4-8th grades, where class sizes in D1 average 20.4 compared to 25.8 in D6.

Even within District 6, class sizes range widely – and in some individual schools classes rise to 30 or more. Both districts have large numbers of poor and ELL students, but as a result of these far more difficult conditions, District 6 has loads of schools on the failing lists – when District 1 has very few.
So how can any reward system be fair that does not take into account the easier time teachers on the Lower East Side have reaching struggling students in classes of 18 or less – especially as compared to those in Upper Manhattan, working with the same high-needs children but teaching classes of 26, 28 or more students at a time?
Some proponents of this reward system may argue that the measures to determine which schools will receive cash rewards will be determined not only by test scores, but by survey results and attendance as well, but these factors are surely as negatively affected by overcrowding; moreover, like the school grades, in which these other factors account for only 15% of a school’s grade, I predict this will be nothing more than a fig leaf.
See also Eduwonkette, who addresses Klein’s argument that pay for performance is a routine practice in other professions and the business world. Instead, in most other fields, performance there are “holistic” evaluations – not based on numerical outputs alone (which in this case would be test scores.) This is true even in medicine:
Physicians I talked to in preparing this post laughed at me when I asked if their performance bonuses were based on patient outcomes. The most common response was that those outcomes were largely out of their control, so their hospitals rewarded them based on their inputs - i.e. hours, procedures, and revenues.
Of course, test scores are even more out of the control of teachers, unless they devote all their time to test prep or resort to cheating – neither of which would be considered desirable. Eduwonkette discusses other reasons that this proposal fails to pass the smell test:
...they do not control for differences in structures over which the school has little control - i.e. class size and large intradistrict differences in per-pupil expenditures - which are relevant for plans that plan to compare performance across schools, not only within a given school.
The administration argues at great length that their reforms have worked to improve student achievement – as in, for example, the small schools initiative. Let’s take this claim as true, for argument’s sake – though I would argue that the possible gains achieved are due more to the smaller classes at these schools rather than their smaller enrollments.

But whatever the reason, if one believes that small schools have inherent value, as Tweed does, how can one then also claim that a reward system that withholds bonuses to teachers who work at large schools could be evenhanded?

Last but not least, see Barry Schwartz' excellent oped in the NY Times. Schwartz is a psychology professor at Swarthmore who wrote an earlier, equally convincing oped in July about Roland Fryer’s experiment to pay kids for good test scores.
This new oped takes off from Joe Torre’s decision to leave the Yankees, and his rejection of the hefty bonus Steinbrenner offered if the team won the World Series next year. Clearly, Torre was insulted by the suggestion that he wasn’t already working as hard as he could to go the distance. Schwartz goes on to write:
If teachers are thwarted by their working conditions, then we need to fix the conditions, and not try to paper over them with bonuses. There are settings in which bonuses may make sense — if the work offers no opportunity to find satisfaction, for instance, or if it really is all about the money. And yes, there should be public acknowledgment of extraordinary performance. But that acknowledgment needn’t be financial, and it certainly shouldn’t be contractual.
The more society embraces the idea that nobody will do anything right unless it pays, the more true it will become that nobody does anything right unless it pays. And this is no way to run a ballclub, a school system, or a country.
Posted by Leonie Haimson at 10/24/2007 05:16:00 PM