The untimely life and death of the City Hall Academy 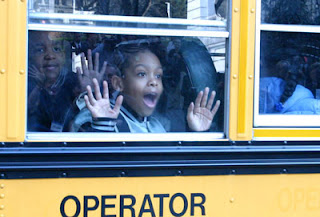 The life and death of the City Hall Academy, as so poignantly told by the NY Times, is emblematic of the story of this administration. Here is an excerpt from the original press release which announced the program's beginning:

“The opening of demonstrates our commitment to excellence, achievement, and innovation in the public school system,” Mayor Bloomberg said. “ will provide children and their teachers a unique opportunity to study and participate in the cultural and historical fabric of the City."

The idea of bringing 3rd and 4th grade students into the DOE headquarters for two weeks to learn about the city's history through an interdisciplinary approach was a good one; for one thing, it allowed students to actually experience the spectacularly beautiful environment of building, and not restrict that opportunity to the highly paid bureaucrats at DOE. One teacher on the NYC education list serv recounted how "Some of the students actually cried when their time was up."

The Mayor's interest in providing this sort of enriched learning experience was quickly supplanted by subsequent priorities --most prominently his 3rd grade retention policy – in which children would now be held back on the basis of their scores, and succeeding on the standardized tests became all-important.

Then, the school was supplanted by the administration's craze for more and more charter schools -- and the need to find space for them. The first of these was the , the charter school founded by Bloomberg’s fellow billionaire, Courtney Sales Ross, who one would think could have afforded to buy any building she wanted to house her school.

When the administration's attempt to place this school into the building of the NEST school on the Lower East Side was blocked by Speaker Silver, the Ross charter school was placed in Tweed, and the City Hall Academy was moved uptown to .

In their unrelenting drive to base all educational decisions on high stakes tests, and to recklessly expand the number of charter schools without requiring that they find their own space outside the already overcrowded infrastructure of our traditional public schools, the effects of the administration's policies on the overall educational experience and opportunities of our public schoolchildren have been ignored.

Just as the ’s first home in Tweed was given over to the Ross Charter; its second home, in , was taken over by yet another charter school. For some reason, the online version of the article is missing the last paragraph of the story in the printed version:

“The building that most recently house the academy is not closed. It is home to the . When a young man answered the phone there recently, he was not surprised to learn the caller was looking for the academy. He said nonchalantly: “Year they’re not here anymore. This is us now.”