City Scores to Rise on Cash for Grades 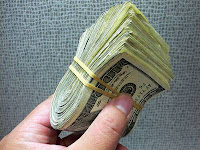 November 13, 2009 (GBN News): The sudden retirement of a North Carolina school principal after a “cash for grades” fund raiser has drawn the attention of NY City’s Mayor Michael Bloomberg. Upon hearing that students in Rosewood Middle School were able to buy 20 test points for $20, the Mayor’s immediate response was, “You can do that?” Mr. Bloomberg then directed Schools Chancellor Joel Klein to offer an administrative position to Principal Susie Shepherd, who will implement a similar policy in the NY City schools.

The Mayor and Chancellor are said to be hoping that enough students will participate in the program to lift the city’s overall scores. Furthermore, to narrow the gap between higher and lower income families, the Mayor will be personally donating money to those students of limited means who can show that they are “motivated enough” to want to purchase the higher test scores.

Sources told GBN News that Mr. Bloomberg regrets only that had this idea come up before the election, he could have deducted the money he is paying for higher scores as a campaign expense.
Posted by Gary Babad at 11/13/2009 03:32:00 PM