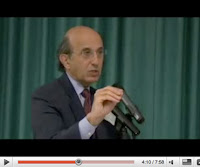 November 16, 2009 (GBN News): NY City Schools Chancellor Joel Klein sharply criticized his own policies today, pointedly referring to the recently released high school progress reports as “more stable and accurate than reports for elementary and middle schools” due to their use of “multiple measures” rather than just standardized test scores. Mr. Klein, who has insisted that multiple measures “dilute the power of accountability”, and that test scores should almost exclusively determine everything from principals’ bonuses to whether to close a school, announced that he will join the ranks of his critics by starting a new blog attacking those practices. According to GBN News sources, the Chancellor had tried to voice his criticisms through the traditional DOE channels, but became frustrated when he found that “nobody seemed to be listening”. The Chancellor’s blog can be found at http://www.kleinvsklein.blogspot.com/.
Posted by Gary Babad at 11/16/2009 01:48:00 PM