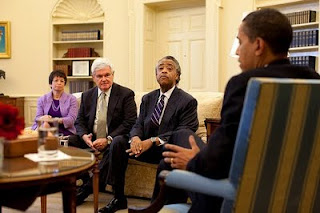 November 30, 2009 (GBN News): The couple who crashed a state dinner honoring Indian Prime Minister Manmohan Singh the other night were not the only recent White House imposters. Despite heavy security, two men posing as “educational reformers” somehow not only got into the White House, but made it as far as the Oval Office for a meeting with President Obama. It is unclear just how the two pulled off the scam, but sources at the White House told GBN News that it may have been an “inside job”. Apparently the men, going by the names Al Sharpton and Newt Gingrich, were personally vouched for by Education Secretary Arne Duncan.

What was particularly troubling, the sources said, was that the President seems to have been warned about the two characters as early as the transition. The person who headed up his educational transition team, Linda Darling-Hammond, had reportedly cautioned the President that the sort of reforms championed by Sharpton and Gingrich were bogus. Ironically, Ms. Darling-Hammond had herself been considered for Education Secretary. Had she, and not Mr. Duncan, been chosen, it is likely that the two hucksters, and others of their ilk such as Joel Klein and Michelle Rhee, would never have been permitted near the White House.
Posted by Gary Babad at 11/30/2009 02:52:00 PM

This is the most hilarious take yet on the party-crasher scandal.