Our Children are more than test scores, Part 3: What Bloomberg, Duncan and Klein should learn from the Chinese 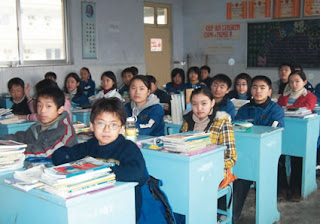 Today, Mayor Bloomberg announced that he would order Joel Klein to tie all teacher tenure decisions to student test scores. Whether this violates state law and/or the union contract is a matter for others to determine.
What I can say is that his decision is the logical outgrowth of the rigid, unreliable and damaging accountability system that he and Klein have imposed on our schools, and that the Obama administration is now attempting to foist on the nation.
Check out Yong Zhao’s critique of the US Dept. of Education's “Race to the Top” program, and its attempt to force states to measure success and reward teachers on the basis of standardized test scores:
I have been reading through the 775-page final notice document to be published in the Federal Register on November 18, 2009. It includes the final versions of application guidelines, selection criteria and priorities for the $4.35 billion Race to the Top Fund (RTT), the largest education grant in U.S. history.
I can guess from news reports, op-ed pieces, and blog posts that many states are working hard to prepare their applications. From my reading of the criteria, I think the following are the winning strategies and actions to include in the application, although they may be inconsistent with research findings or common sense.
Suggestion #1: Stop paying teachers and principals a salary. Instead pay teachers and principals on a per standardized test point basis each day. At the end of each school day, students should be tested using a standardized test, what a teacher and principal is paid is calculated at the end of the day based on the growth of the student, i.e., how much has the student improved over the previous day. This is true accountability and will for sure keep teachers and principals on their toes! ….

Suggestion #2: Remove all “non-core” academic activities and courses and reduce all teaching to math and reading because what the Secretary wants is “increasing student achievement in (at a minimum) reading/language arts and mathematics, as reported by the NAEP and the assessments required under the ESEA” … Actually, no need to teach them these subjects, just teaching them how to pass the tests may be even more effective.
For his other (clearly ironic) suggestions, check out Over the Top: Winning Strategies for the Race to the Top Fund.
Zhao is a Distinguished Professor at Michigan State University, and his perspective is particularly interesting, as he was raised in China and once taught there. See what he says in another posting about what the Chinese government has learned from its top-down approach – and what America should learn from China's self-acknowledged mistakes:
China is determined to reform its education to cultivate a diversity of talents and creativity. China has recognized and suffered from the damaging effects of standardized testing and has been trying very hard to move away from standards. If America or any other nation wants to worry about China, it is its determination and focus on creativity and talents, not its test scores.
Once standardized test scores become an accepted way to judge the potential and value of a child, the performance of a teacher, and the quality of school, it is very difficult to change. We are already seeing signs of this in the U.S., thanks to all the education reformers who want to make Americans “globally competitive.”
Zhao is author of Catching Up or Leading the Way: American Education in the Age of Globalization, and was recently on the Brian Lehrer show, Comparing Education in China to the U.S. Here is an excerpt from his book:
Clearly, American education has been moving toward authoritarianism, letting the government dictate what and how students should learn and what schools should teach. This movement has been fueled mostly through fear—fear of threats from the Soviets, the Germans, the Japanese, the Koreans, the Chinese, and the Indians. The public, as any animal under threat would, has sought and accepted the action of a protector—the government.
Let's hope that Americans reject this reflexive, damaging vision of education, and take a closer look at the potential consequences before we let our government turn our public schools into those like China's.
See also this Huffington Post column about how like China, South Korea is trying to move away from a system based solely on standardized test scores.
Posted by Leonie Haimson at 11/25/2009 10:18:00 AM

I taught English in Japan for 3 years. Elementary school in Japan was lovely and creative. Students did lots of fun and interesting projects. By middle school however, standardized testing took over and kids were selected either as college-bound or vocational students. The stress on children and parents was enormous, with 11 year old kids going to school for 12 hours a day in order to get ready for the all-important test that would determine your future. Imagine having your future determined at 11.