Turkey Is As Turkey Does 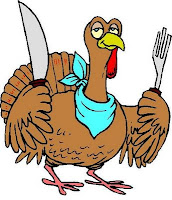 November 25, 2009 (GBN News): NY City Schools Chancellor Joel Klein narrowly escaped what could have been a very embarrassing fate last Saturday. Mr. Klein was traveling through Suffolk County on his way to visit friends in the Hamptons when a hunter accidentally took a shot at him.

The hunter, Samuel Cranbog of Huntington Station, was participating in the annual Long Island Turkey Hunt when the incident occurred. When reached for comment, Mr. Cranbog was apologetic but defended his actions as an honest mistake. “After all,” he told reporters, “If it looks like a turkey, sounds like a turkey, and acts like a turkey, one has every reason to believe that it is a turkey.”

Still, Mr. Cranbog was relieved that his shot missed its target. Noting that his wife is a NY City schoolteacher, he said, “If I bagged a turkey like that, she’d never let me bring it into the house.”
Posted by Gary Babad at 11/25/2009 10:03:00 AM