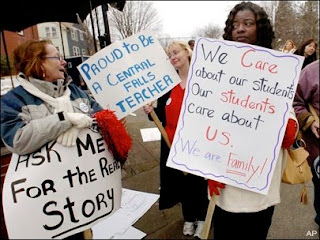 Last week, when Arne Duncan said that he applauded the superintendent's decision to fire the entire staff of Central Falls high school in Rhode Island, the poorest school district in the state, with high rates of immigrant and transient students, I thought he might get in trouble, just as he did earlier when he said that Hurricane Katrina was "the best thing" that ever happened to New Orleans schools.
Duncan explained that the superintendent was "showing courage and doing the right thing for kids."
No such luck. President Obama has now seconded the opinion. Perhaps it is not surprising, since it is the federal government that is essentially blackmailing cash-strapped states and districts into imposing such arbitrary "solutions" to the problem of failing schools.
To be eligible for the "Race to the Top" grants, states have to impose one of the following four options for their lowest-performing schools: school closure; takeover by a charter management organization; requiring that the entire teaching staff be fired and no more than 50 percent rehired , or school "transformation" which requires a longer school day or school year; with only a small number of failing schools able to try the last of these.
These drastic, punitive strategies, along with removing caps on charter expansion and tying teacher evaluation to test scores, are the prerequisites for states to be eligible for grants that the US Dept of Education is holding out, like crumbs to a starving child.
None of these options have been validated by research, by the way -- as the National Academy of Sciences has pointed out about many of its elements -- and some of them, as the NAS warned, may have unanticipated and damaging consequences.
Moreover, according to a recent analysis by Bruce Baker, educational finance expert at Rutgers University, Central Falls High school does no worse and a bit better than other schools in the state, when the poverty of its students and its relative level of funding is taken into account:
"As it turns out, the relative efficiency of Central Falls HS stacks up pretty well with other Rhode Island High Schools. That is, the actual spending per pupil in Central Falls is not far off from the predicted amount to achieve their current outcomes, with their current population.... Central Falls is doing as well with what it has as any other Rhode Island High School, after accounting for student needs.."
Indeed, the idea that teachers are at fault with the poor performance of our schools with poor students, crowded classes, and low funding, would be like blaming the results of our inequitable access to health care on the medical profession.
Not to mention the question of what firing all the teachers at this school is supposed to accomplish. What experienced, qualified teachers in their right mind would consider applying for a job now at a high poverty school-- when the entire staff might face dismissal? Or as Valerie Strauss, columnist for the Washington Post writes about the administration at Central Falls:
"Now, all they have to do is find 93 excellent professionals to take their places. Recruiting the best educators should be easy, especially when you can offer them life in a very poor town and a job with no security."
Can you imagine if the US Dept. of Health and Human Services demanded that before receiving Medicaid funds, all the physicians in urban hospitals be terminated because of the poor health of their patients? It would never happen.
Doctors are not considered responsible for the irrationally inequitable distribution of health care in this country -- though it is the fashion to blame teachers for everything that goes wrong with urban education in this country.
The NEA and AFT have posted a petition in support of the Central Falls teaching staff; go sign it!
Posted by Leonie Haimson at 3/01/2010 09:01:00 PM