To add insult to injury: more co-locations and charter school funding tonight at the PEP 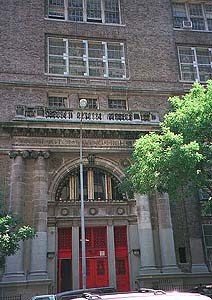 The Panel for Educational Policy will vote in Staten Island tonight on the co-locations of another ten schools.
As Joel Klein said at the last PEP meeting, “I wish we had much more space so that each school could have all the space it needs, but we have the space that’s provided to us in our capital budget and by the city. And our obligation is to ensure that that space is shared equally by all 1.1 million students.”
Yet the more co-locations he orders, the more overcrowding is created for all 1.1 million public school students. As John White admitted at a recent City Council hearing, small schools and charters are an inefficient use of space. Moreover, these co-locations will create further inequities across the system.
The Daily News has an article in today’s paper about how the co-locations are pushing out special education students, who in many cases are receiving their services in locker rooms, closets and staircases: Parents say special-ed kids falling victim in charter battle for space inside city schools .
In our principal survey, more than one fourth of principals (27 percent) said that the co-location of new schools or programs in their buildings had worsened the level of overcrowding in their schools, leading in many cases to lunch times before 11 AM, and slightly more than half said that overcrowding sometimes leads to unsafe conditions for students or staff.
Moreover, some of the schools that will be forced to give up additional space are on the city, state and/or federal accountability lists, and yet still have excessive class sizes.
For example, Washington Irving HS, according to the DOE, has a graduation rate of 38.3 percent. It is quite likely that next year, the school will be on the chopping block unless its results radically improve. And yet the average reported class size is over 28 students per class.; and in many subjects, classes are as large as 34, and one CTT class has a class size of 41.
These class sizes are far too large and much higher than the other schools in the building, some of which are more selective with higher achieving students.
If there is room to put a new school into the building in which Washington Irving HS is located, there is also be room to reduce class size to at least the state mandated level of 25, or even better, to the state average class size for high schools, which is twenty students per class.
The failure of DOE to reduce class size at Washington Irving, full of struggling students, is not only inequitable; it calls into question whether the administration intends to allow this school to improve results or would rather see the school, along with its students, fail.
For other examples of the negative impacts of these co-locations, see our full comments here.
To add insult to injury, also on the PEP agenda tonight is the DOE's proposal (see pp.12-13) to spend more than $2.08 million per year, totaling more than $10.4 million over five years, to train “non-public school principals” (read charter school principals) to become “school building” leaders.

Though the administration has apparently claimed that these are just “federal funds passing through the DOE,” they are actually redirecting Title II funds that could be used for many other purposes, including keeping class sizes as low as possible in the public schools, in the midst of potentially massive cuts to the teaching force. Or even to train public school teachers or principals.

Instead, DOE wants to use these precious funds to teach the principals of charter school how to run the buildings and boss the public schools whose space they have occupied.
Posted by Leonie Haimson at 3/23/2010 03:44:00 PM

I think Washing Irving HS is already slated for closure. It already has a small school in its space. From my understanding, Irving HS is in phase-out mode.