The saturation mailings and advertising of Harlem Success Academy

See this message from a friend who lives on the Upper West side, who has a child entering Kindergarten next year, about the multiple mailings he has received from Harlem Success Academy:

Today we received the 3d or 4th mailing in the last week from the Harlem
Success Academy, looking to enroll [his son’s name].

This really surprises me: A. How do they get the $ to do direct mail & find out what kids are going to start kindergarten?
B. Why are they direct mailing to White couples on 102nd?

Really curious if you have any thoughts or insight - -

The infamous Eva Moskowitz/Joel Klein emails, FOILed by Juan Gonzalez of the Daily News and posted here, revealed how Klein overturned long-standing policy to provide her with names and addresses of prospective parents through mailing houses; and allowed her to make repeated mailings to promote her chain of charter schools.

Juan’s column in which he showed how she picked out the space she wanted for her schools in existing zoned public schools, which Klein then tried to illegally close for her benefit, is here.
His earlier column about the preferential treatment she received from Klein, including his help in securing a $1 million grant from the Broad Foundation to build an army of parents to promote their political agenda, is here.

In her emails to Klein, Eva confides her desire to engage in saturation mailings, supposedly to promote “choice”, but really to build up her waiting list; which then she uses as a political weapon in their battle to lift the charter cap.

This may be one reason DOE is making parents register for Kindergartens earlier at public schools, so they can capture their addresses and make them available to charter schools in time for their lotteries.

Though Eva told the NY Times she spends $325,000 on recruitment, a cursory examination of the school’s financial statements shows that her spending on recruitment is actually much more.
She has run ads in buses and is now also advertising on NY1. The actual expense must be near a million dollars or more. Harlem Children’s Zone was featured on American Express ads during the Oscars.

Of course, no district public school could afford this sort of marketing campaign; and if they did, they would be accused 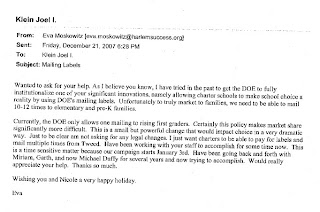 To the left is Eva’s message to Klein, dated Dec. 21, 2007, in which she complains about the fact that DOE only allows “one mailing to elementary and pre-K families” and that she wants to be able to mail promotional materials 10-12 times to each family.
As in all things between Klein and Eva, she quickly gets her way. Her choices are clearly maximized! Soon thereafter, she is provided with unlimited mailings through a third party mailing house to prospective public school parents.

To the right and below is the response from Michael Duffy, the head of the DOE charter school office, written the day after Xmas, in which he pledges cooperation and tells her she can always call him, day or night, on his cell. 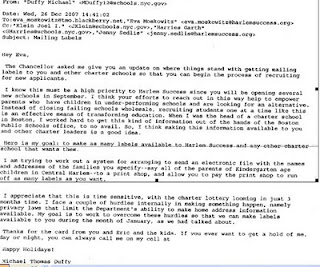 Eva has now extended the reach of her mailings into large swathes of Manhattan and the Bronx. As one astute observer pointed out, this not only allows her to build up her charter school waiting list, but also to gather names for future battles over the charter school cap, funding, or her own future candidacy.

Her mailings and advertising, financed through contributions from her hedge-fund supporters and billionaires like Broad, resemble the saturation mailings and domination of the air waves that New Yorkers have been subjected to by our billionaire mayor, each time he runs for re-election, sparing no expense.

Just as he has bought his way into a third term, the hostile takeover of public education by charter schools has nearly unlimited financing to back it up. No one could argue that this is an equal contest, when all the advantages are being provided to the charters; not to mention Klein’s relentless promotion of charter schools, which is priceless.
Is this the future we really want for our public schools?
Posted by Leonie Haimson at 3/14/2010 02:10:00 PM

Last school year, at a D3 CEC meeting, outraged parents brought with them the HSA mailing that featured photos of a peeling, worn public school door and a shiny, freshly painted charter school door; the text asked where the recipients would rather send their kids. I feel like that was the first HSA mailing that many of us received & it was so outrageous that I think I saved one. John White was at the meeting and didn't have much to say about HSA's 'message,' but when asked why public schools didn't get funds and assistance to do the same glossy PR, he promised the K-2 school under discussion that they would receive comparable DOE help marketing themselves (...that has, to my knowledge, not materialized) . At a subsequent meeting, when the mailings kept coming, parents asked what list they were on and who exactly had access to their children's info. The CEC said that mailings were done by a service which printed labels with names of public school parents/children in the zip codes the sender selected. We were told that the actual names and addresses never went to HSA but were affixed to the mailers by the mail house.

I have been receiving these mailings (in duplicate!) for two years in your friend's same zip code; I always send them back marked return/remove from mailing list, which of course never works. The latest came today: "Around here, every child is college material." UGH.