Our day of rage at City Hall 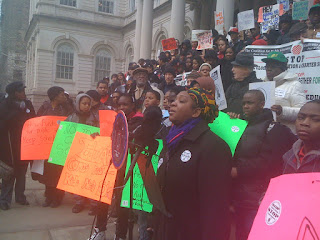 Today, NYC's education "day of rage" was observed by angry parents, teachers, students, elected officials and community members at a rally organized by the Coalition for Public Education at City Hall.
All of those present expressed fury and disgust at how are schools are being closed, dismantled, privatized and destroyed. Joel Shatzky reports on the event at the Huffington Post.
This photo shows Muba Yarofulani, parent leader, speaking to reporters representing media outlets from throughout the world, from Harlem to Russia.
While I was speaking to the crowd about the recklessness of the men who who are shuttering our schools to put charter schools in their place, and who say they want to expand parent choice but who are taking away the most basic choice of all, the right to send our children to a high quality neighborhood public school, Chancellor Klein scurried past us into City Hall, and the crowd started to jeer and boo him.
This incident is also described on the Daily News blog, which relates how Bloomberg is using the fact that NY State made the finalist list for the Arne Duncan slush fund known as "Race to the Top" to complain once again that the cap on charters must be raised.
Yet the administration blocked a bill that would do that earlier this year, because it would allow the state comptroller to audit the charter school managers use of public funds, and would give parents a voice as to where those charters would be sited.
As many of us observed today, the tide is turning and it is time to take our schools back!
More photos of the rally here.
Posted by Leonie Haimson at 3/04/2010 08:59:00 PM