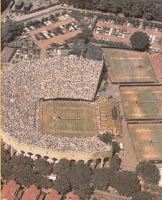 August 11, 2010 (GBN News): In an abrupt change of plans, a former tennis stadium, reportedly in line to be turned into condos, will instead be bought by the NY City Department of Education and used as a giant high school classroom. The historic Forest Hills Stadium, home to countless US Open championships before being replaced by a new stadium in Flushing, has been the object of controversy, and the decision to sell to a private developer had rankled many community groups that wanted to see the facility put to public use.

Schools Chancellor Joel Klein, in announcing the plan in a press conference at Tweed Courthouse, told reporters that the purchase will more than make up for any planned high school closures in the borough of Queens, where the stadium is located. “We’re closing high schools with maybe 14,000 students total,” the Chancellor said. “The stadium holds 15,000, so we’re actually gaining space.”

“For those naysayers who insist that the DOE favors charter schools over public schools,” Mr. Klein continued, “I dare you to find me any charter school kids that can boast that they go to school in a historic facility that has housed the likes of John McEnroe, Billie Jean King, and Arthur Ashe.”

The Chancellor did not directly address the issue of where students will go in bad weather, since the stadium does not have a dome. But GBN News has learned that the DOE recently put in a purchase order for 15,000 ponchos.
Posted by Gary Babad at 8/11/2010 12:39:00 PM

The kids don't actually have to *go* to the stadium. They can access it remotely by the internet. Increasing its capacity to 2 billion.

That doesn't sound like reasonable class size. What the hell are they going to use that for?

Oh I missed the GBN

Anonymous 2:03- It's true, if you don't see the GBN, you can almost imagine them doing something like this.