Our schools are held hostage by an outlaw 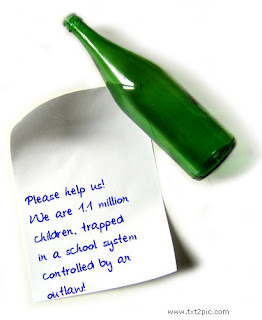 So let’s get this straight:

When Justice Joan B. Lobis of State Supreme Court in blocks the closures, finding “significant violations of law,” Klein ignores the court order by refusing to assign students to these schools.

When the city is sued by the UFT, Class Size Matters and others, charging that Klein failed to comply with the law requiring them to reduce class size, despite taking nearly a billion dollars in state funds in exchange for a promise to do so, the city argues that the courts have no jurisdiction over this matter.

When Justice John A. Barone of the State Supreme Court says the courts indeed have jurisdiction over this issue, Klein says he will appeal Barone's decision, and insists that only the NY State Education Commissioner has the authority to determine whether he is following the law.

When the same NY State Education Commissioner David Steiner forbids him from moving autistic kids out of PS 94 on the Lower East Side, so that Girls Prep charter can expand within the building, saying that the city failed to carry out the mandated public process for significant changes in school utilization, Klein ignores the ruling, invoking “emergency” powers, and goes ahead anyway.

1.1 million schoolchildren (and their parents) are being held hostage by this outlaw. Are there any limits to Klein's open contempt for the rule of law?

More importantly, what can be done? Are state legislators listening? Is anyone?

Typical of Joel Klein's contempt for everyone who doesn't agree with his misguided vision.

I say, this is clearly one of those instances in which laws are for the little people. In fact, such practices are commonplace. It's really irresponsible of sites like this to get the bootless and unhorsed all in a snit over such things. If you knew what was best, you'd be rich. As you aren't, you really should learn how to follow instructions. This Obama chap has been a breath of fresh air and I'm absolutely certain he will back Mikey and Joel here.

For the love of Smedley, why don't you seek gainful employment?