Listen up, mayor and the NY Times 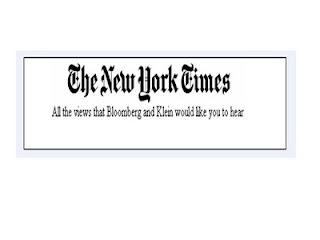 erstand how the weak state exams had been "shortchanging students" and that they did their "children no favor" when they disrupted a Panel for Education Policy meeting on Monday. This was after the PEP chair, David Chang, refused to let them speak in response to a long, deceptive power point that claimed, despite the collapse of the state test score bubble collapse, that the schools had made great progress.

The editorial also excused the state test score inflation by stating, "Weak state tests are a chronic problem throughout the country — one that education departments are only beginning to come to grips with." Oh please. The NY test score inflation has been obvious to nearly all objective observers since at least 2007, despite the fact that it conveniently allowed the mayor to claim great improvements during his campaigns for the renewal of mayoral control and re-election, illusions that were bought hook line and sinker by the mayor's allies on the Times and the other editorial boards.

The editorial ended by claiming that the schools have nevertheless been "narrowing the performance gap between white and minority students." Yet the gold standard, the national exams called the NAEPs, show no narrowing of the achievement gap in any grade or subject since the Klein regime began. Truly, the Times editors "need to know" and start living in the real world, for they, along with the chancellor and mayor, have lost all credibility, and should stop criticizing parents while displaying their ignorance of what's really going on in our schools.Our mayor, who famously said people could "boo him at parades" if people didn't like his educational policies, will likely see more booing of his Panel of Eight Puppets in the months to come, unless he wakes up and starts to listen.

In response to this courageous call for action, let this be the clarion for civil disobedience that topples the corrupt, shameless and deceitful regime at Tweed. We need to seize power from the self-serving, arrogant, greedy hedge fund managers and return respect and dignity to the parents and teachers. We don't need 25 year old leadership academy snot noses with Nazi personalities who never taught a day in their lives, threatening and dehumanizing experienced veteran teachers. The corporate model is loaded with corruption and power hungry despots. Return education to educators, not Wall Street pimps.

Let this be the turning point and point of no return. We need a 24/7 wiki-leaks for Tweed. Patrick, lead us out of bondage. . .

Best "News" I've heard all year! I hope they're listening!

Enough of this nonsense of pitting charter schools against community public schools with the Chancellor firmly on the side of the charters. The Mayor and Chancellor are responsible for ALL Public schools. It's about time they start doing the right thing for our 1.1 million children and stop robbing them of a decent education and dividing our communities.

Article is giving the truth! However, I don't think NY Magazine can compete with the 'spin' from the billionaire mayor and his chancellor who are already claiming that their gains in NYC are responsible for being awarded funds from 'race to the top'.

From NYCDOE website: “New York State’s selection is a testament to what we’ve accomplished in our City’s schools over the last eight years,” said Mayor Bloomberg. “Our students have shown tremendous improvement and now – as a Race to the Top participant – we will work with our teachers and school administrators to raise the bar once again.”

Those such as Diane Ravitch have said this for years on deaf ears. NYC school system is a complete dictatorship. Administrators and teachers must do as they are told or else....

I don't have much faith in this article making a difference regardless of how true it is.