The battle for the soul of a community: scenes from contentious charter school hearing in S. Williamsburg -- and the memory of another controversial co-location 25 years ago 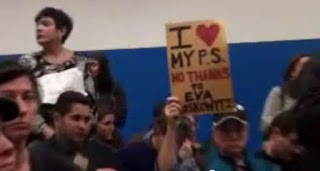 Please check out the videos of Thursday night’s contentious hearing on the proposed co-location of yet another branch of the Success Academy charter school, this one in IS 50 in South Williamsburg, a proposal that the entire community has risen up in opposition to,  because of the discriminatory recruitment and enrollment policies of the hedge-fund backed Success Academy charters, their policy of pushing out high needs students, and the fact that there are four under-enrolled public elementary schools in this mostly Latino neighborhood within three blocks of the proposed charter.


Nearly 500 parents, teachers, students, and community leaders filled the large auditorium, with more than 80 of them speaking out against this co-location proposal, and fewer than five parents from Brooklyn spoke out in support.  The rest of the audience consisted of parents bused in from the various Success charter schools in Harlem.

And yet NYTimes/Schoolbook story ran a highly inaccurate and biased account, showing a large photo of the Success Academy parents, captioned with " parents turned out to support the co-location of a Success Academy charter school at J.H.S. 50 John D. Wells in Williamsburg, Brooklyn", without explaining that they were bused in by the charter operator from Harlem. The article went on to give most of its space to comments from the handful of supporters of the charter school, including the chain’s founder, Eva Moskowitz, with almost no mention of the huge outcry from the hundreds of community leaders, elected officials, and local parents who came out to oppose it. (Read what Williamsburg & Greenpoint Parents for Our Public Schools says about the piece, and read the irate comments from parents and community members at the Schoolbook website.)
Instead, see the video of the nearly 500 parents, students, teachers and community members leading off the hearing,  chanting, “Whose schools? OUR schools” and Ms. Denise Jamison Principal of IS 50, where the DOE plans to put the charter, saying how grateful she is for the support of the community.
Here's the video of Council Member Diana Reyna, pointing out that the District 14 Community Education Council that is supposed to preside over the hearing is not present because the members are boycotting it in protest; she says that we need the record to reflect that this proposal is not supported by this community.  She recounts how in Sept. 1986, more than 700 parents at S. Williamsburg's PS 16 kept their children home from school-- a 90% absence rate -- in protest of a plan to create segregated classrooms in the school.
(This 1986 protest occurred in reaction to a Board of Education plan to construct barriers inside PS 16, and to hire Jewish teachers to provide remedial education to Hasidic girls enrolled in a nearby yeshiva, in classes held in separate classrooms from PS 16’s mostly Latino students. The parents of PS 16 protested that this segregation was not only discriminatory but would also cause more overcrowded classes for their own children.  The plan also required the displacement of 69 students with disabilities to other public schools -- to make way for the Hasidic classes. The parents of PS 16 sued, asking the court to block this plan, and subsequently won on appeal.  Here is an excerpt of the decision from the US Court of Appeals:
....each day, the public school students would observe some 390 Beth Rachel students arrive at P.S. 16. The Beth Rachel students would be taught in classrooms only they may use; no public school students would be taught either in those classes or in those rooms. Yiddish would be spoken in the Beth Rachel classes. Only Hasidic girls would be taught; those girls would be allowed no contact with boys. Only female teachers would teach the Hasidic girls. And where once there was an open corridor allowing freedom to traverse the entire hall, there are now a wall and doors partitioning the Beth Rachel girls from the public school students....

The lengths to which the City has gone to cater to these religious views, which are inherently divisive, are plainly likely to be perceived, by the Hasidim and others, as governmental support for the separatist tenets of the Hasidic faith. Worse still, to impressionable young minds, the City's Plan may appear to endorse not only separatism, but the derogatory rationale for separatism expressed by some of the Hasidim.)

Here's another video clip, where  CM Reyna says that DOE has abandoned our public schools; despite the fact that our students have a basic unmet human right for quality education.   Evelyn Cruz, representing Congresswoman Nydia Velazquez, ironically “thanks” DOE for once again dividing parents, children and neighborhoods, and disenfranchising them throughout the city.

Rob Solano, head of Churches United for Fair Housing and former IS 50 student, then speaks out in support of the public shool and against the charter co-location: “this is where I learned how to be a boy and then a man and learned about the world,” Ruben Flores, lead organizer for Churches United For Fair Housing also speaks out against the proposal.
More video as Khem Irby, CEC member from District 13, says that Brooklyn does not need any more charter schools, which are here for only one purpose: the money, and not about education. As a former charter parent, she understands the abuse that happens to children in charter schools and that they do not need this in any of their communities, and parents are forming a united front in Districts 13, 14 and 15 against any more charters in their neighborhoods.

I berate the two DOE officials presiding over the hearings, Gregg Betheil and Paymon Rouhanifard.  I say they should be ashamed of themselves and ask if they went into education to provoke the kind of division, anger and resentment seen tonight; I urge them to tell whoever who is making this decision to say no to this charter school; as there has to be someone in the city with the balls or guts to say no to Eva.  I add that if there was one thing good that came out of this evening, it is that it is clear that NYC parents love their public schools and want them protected and supported, no matter how hard the DOE has tried to destroy them  through budget cuts, test prep and rising class sizes.  Lastly, I recount how at the recent City Council hearings on college readiness, the only thing the Council and the DOE agreed upon was that El Puente is a great school and should be replicated; with DOE officials repeating this several times.  So why don’t they replicate El Puente here and create a great 6-12 school, instead of bringing in a charter school that no one in the community wants or needs?
The videos end with Luis Garden Acosta founder and President of El Puente, thanking Ellen McHugh of the Citywide Council for Special Education, for taking a strong stand in favor of the community and against the charter school co-location.  He concludes by saying, tonight the DOE has heard from white, Latino and black parents, all opposed to this proposal; from students, teachers, and community leaders; from our City Councilmember, our State Senator, and our member of Congress; in fact, they've heard from the entire Southside community in opposition, what else does it take?  He then leads us in a chant, “the People united will never be defeated,” first in English then in Spanish, and we walk out together, leaving the auditorium empty except for the DOE and their clients, the charter school operators and the parents they bused in from Harlem.
Posted by Leonie Haimson at 2/20/2012 12:01:00 AM

Simple...DON'T VOTE FOR OBAMA...abstain...and BE VOCAL ABOUT IT...If every teacher in the country sits this Pres. election out...OBAMA WILL LOSE...! Obama is the main impetus behind all of this, can't you see that? He's relying on your hatred for the GOP, and not sweating your vote. What he has just done to us is THE worst case scenario. The Repubs couldn't have done us any worse than this...this is teacher Armageddon.