Carol is the courageous Long Island principal who co-authored the letter, signed onto by  one third of all NY State principals, protesting the NYS teacher evaluation system. Her follow-up article for the Washington Post Answer Sheet was called, “Forging ahead with a nutty teacher evaluation plan.” 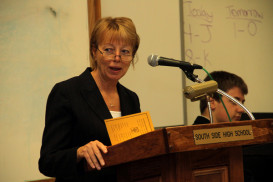 Below is the email she sent out, late last night; appended to a press release from Commissioner King and Regents Chancellor Merryl Tisch, that contained an outline of the provisions in the agreement announced yesterday.
The agreement, as summarized by King and Tisch, says that test scores will trump all, as “Teachers rated ineffective on student performance based on objective assessments must be rated ineffective overall.”
In addition, the Commissioner can reject any locally devised system that isn’t “rigorous” enough, and can require “corrective” action if “districts evaluate their teachers positively regardless of students’ academic progress”, i.e. refuse to rate them as ineffective based on test scores alone.
This all will be done by means of unreliable state tests that in recent years have been repeatedly shown to be defective, as filtered through a “growth” model that has been shown to have even less reliability.
The only possible meaning of “multiple measures” in this context is that there are multiple ways to ensure that a teacher can be judged as a failure.
___
From: Carol Burris
Sent: Thursday, February 16, 2012 10:16 PM
Dear friends,
Every teacher I know in NY is in a state of shock after seeing what NYSUT agreed to.  I think principals were somewhat prepared, but I do believe that teachers had hoped that somehow NYSUT would come through for them.  The power transferred to the commissioner is unprecedented. The governor's 'shot clock' flies in the face of the Taylor Law. The fact that Randi Weingarten applauded this agreement is beyond comprehension.  Teachers feel abandoned.
The governor who just last week said "I am the government" is a bully who is now thumping his chest in victory as the 'student lobbyist'. My greatest fear is that educators will be so discouraged they will bow their heads. Anything you can write, post, blog or send as an editorial in the next days and weeks will help to lift spirits.  I know Sean and I will keep the letter going but we will need your help in keeping resistance to this wrongheaded policy alive. thank you for all you do. Carol
Posted by Leonie Haimson at 2/17/2012 09:35:00 AM

I applaud your voice and efforts! This is indeed a case of double jeopardy. I fear our pensions are the real target...we'll all have to wait and see how the first lawsuit pans out.

Carol Burris certainly is a courageous principal. I would love to work for a principal like her, professional, knowledgeable and stands up for her convictions. cr

There is nothing to fear. Challenges that are presented in life are designed to weed out those who are less likely to survive. It's simply biology. I think we should stop panicking and embrace the change. The worst case scenario is we all lose our jobs and then who will work in the schools next? Of course it's certain this will never happen so have faith that there are other models of teacher evaluations that will emerge to include other components especially student and peer feedback. The gray areas will also be addressed. I believe those teachers who are fit for this job have nothing to fear. Let's turn this fear mongering into intense moments of self-reflection then action in the classroom for our students. If you are doing your absolute best and you get booted for low test scores, at least you haven't lost your dignity.

>> Challenges that are presented in life are designed to weed out those who are less likely to survive.<<

Social Darwinism shouldn't be the basis of public education in a democracy. Darwin himself rejected the application of his evolutionary theory applied to the social order.

Furthermore, I do think you have a good point that a teacher shortage will emerge if too many are found "ineffective".

However, there's also the issue of handing more power away from the stakeholders in the school to bureaucrats like King and politicos like Cuomo.

Why not give parents and students a say in teacher evaluations (say 25 percent)? Parent surveys for elementary and middle, student surveys for secondary. Let peer review handle another 25 or so percent, 25 percent administrative and a final 25 percent for "objective" measures. Teaching is a complex endeavor. Nothing short of a multifaceted assessment can approach adequacy in evaluation.

By the way, charters, who do receive the tax dollars in a given community when opened, are exempt from this plan....we all do see where this is headed right??? The millionaires and billionaires win again!!!

Carol, I think all Teachers Unions who do not have this in place yet should not ratify any contract that has it.....Oh wait, then Dictator Cuomo will rally public support to repeal the Taylor Law!! Thanks Dick Ianuzzi for all you didn't do here....I think all NYSUT members should call for a vote of no confidence for Dick Ianuzzi

if teachers are not responsible for test scores, then who is?
a retired teacher

How about the parents take a role in their children's education? Test scores have proven to be completely unreliable (standardized tests). Then to base a persons career on a student or students who are completely not interested is unfair and unjust....