No Team Left Behind 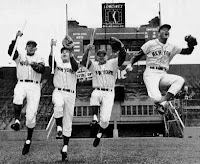 February 23, 2012 (GBN News): Signaling a new flexibility in his signature Race to the Top program, Education Secretary Arne Duncan announced today that he is giving local school districts greater leeway in at least one area. From now on, in subjects for which there are no standardized tests, districts will have the option of basing teacher ratings on major league sports scores instead of test scores.

While teachers in untested subjects will no longer have their ratings tied, as they often are now, to the test scores of other teachers, the new rules do raise a number of issues. For example, if there are two teams in the same city, which team’s scores will be counted towards teacher evaluations? Furthermore, teachers in small market cities, whose teams cannot afford large payrolls, could be placed at a disadvantage.

However, the Secretary dismissed those concerns as “groundless”. “A good teacher can overcome the effects of a low team payroll,” he told reporters. “And if not, that teacher should be fired.”

NY City Mayor Michael Bloomberg, for one, enthusiastically endorsed the plan. “I’m sick and tired of people blaming rich guys like [Mets’ owner Fred] Wilpon for their team’s failure,” the Mayor said through a spokesperson. “Now people will put the blame where it belongs – on the teachers.”