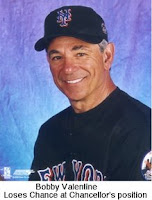 October 27, 2007 (GBN News): Schools Chancellor Joel Klein has decided not to resign over Mayor Bloomberg’s plan to include performance incentives in his contract. The Chancellor reconsidered after being assured by Mayor Bloomberg that he could earn his performance bonus simply by instituting performance based pay for 100 of his top administrators. According to sources at the DOE, the Mayor feels that since the Chancellor’s main role is to make sure others are accountable, just holding his top administrators to “standards” would be sufficient to show that Mr. Klein is doing his job effectively.

In other news, GBN News has learned that principals now being assigned to oversee rubber rooms will also be held to performance standards. Rubber room principals will be offered bonuses based on how well they maintain order and discipline as well as on the arrangement of chairs and bulletin boards in the room. They will be also be graded with respect to their teachers’ behavior, posture, and number of bathroom visits. Principals in the bottom 10% of rubber rooms, based on these standards, will be at risk of losing their jobs.
Posted by Gary Babad at 10/27/2007 12:43:00 PM