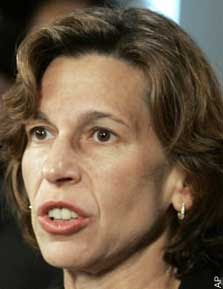 In what was an open secret but never publicly disclosed before, Randi Weingarten, the President of the United Federation of Teachers, talks about being gay in this week’s issue of Gay City News. Congrats to Randi for doing this.

She also mentions the UFT's support for the City Council's passage of anti-bullying legislation that Mayor Bloomberg has refused to implement.

Update: more on this disclosure, from the Daily News and NY Post.

If the newly crowned coming out queen is so concerned about bullying, why is the UFT itself a bully? She should be intervening in, not tacitly approving, the constant DOE bullying of teachers , parents, and high school students. I really could care less about her sexual orientation. We've known about it for years and it makes no difference to teachers in the end. We are bullied and publicly chastised by administration every day, and not because we are gay, but just because we are teachers, and cogs in their bureaucratic machine.