Should cell phones be allowed in schools? 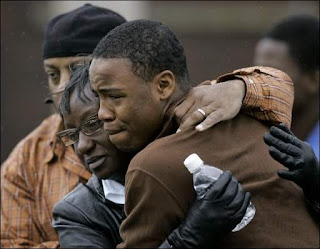 On WCBS news yesterday, Maria Dapontes-Daughterty, the President of the Presidents Council in D30 Queens and I were interviewed by Marcia Kramer about how recent shooting incidents at the Success Tech HS in and University in Queens underlined the need for our children to be able to carry their cell phones in school.

WCBS ran the anguished recording of a mom, calling the police after her son had contacted her by cell phone, while hiding from the gunman in a closet at school. This was juxtaposed with a clip of Bloomberg, scoffing that parents only want to contact their kids " to find out whether they want beef or fish for dinner."

The story also makes the point that the lockers outside would not help if there was an attack within a NYC public school. It's a powerful bit of news -- check out the full transcript and the video here: Should cell phones be allowed in NYC schools?

i think we need cell phones it school in between classes not nessasarly in classes but carry them along just in case something does happen someone will be able to contact whoever they need to.

ii say cell phones should be used in school for many many reasons.

#1 . there been several cases of shootinn cases and lockdowns in chool and kids have been killed because there cell phones were eithere taking away or baned from the school !

#2. what if there is a bomb theat and you need ti call and get a ride out of there asap or to even call the police!

you should really be able to use cell phones. If theres ever shootings maybe this time no one will get hurt in they have cell phone

who cares. people die cause of the shooter

I am writing an essay on this subject beacause cell phones are being banned in our town. But cell phones can be very usefull.If something like 9 11 happened again my parents would want to make sure I was safe.Or if my dad was in a car accident, i wouldnt want a note from the office, i would want to talk to them.Or even if my parents arent going to be home when i get off my bus, it would be nice to know.What if when i got off my bus someone grabed me and shoved me in their car? and i was trapped in their car? i could call 911 and not say anything, just let them listen, or text that i was in trouble. With out a phone i could be done for. Just something for the school boards of the world to think about.Peace out!!!!-Megan

I am writing a 5 page paper on school allowing cell phones in school. There are many reasons they shouldn't but there is also many reasons why they should. Some reasons to have cell phones in school would be if a student was sick and they had some of their school work at home and they couldn't remember what homework assignment they had to do for that day. They could just text a friend that they know that would know about the assignment and they would tell them. Another major reason why students should have cell phones in school is if the parents had an emergency and had to tell you that they couldn't pick you up or if say one of your parents was in an accident. If the principal called you down saying that your parents were on the phone, I certainly wouldn't want to go all the way down there to suddenly hear that my Mom or Dad was in an accident. I would want to talk to them myself and hear what they have to say. Well, I have to go back to researching now. Just remember what can happen if you didn't have your cell phone on you.

CARCK!!!
i love my braack buddie
shes the best
we love crack.
WATCH OUT ITS IN THE WATER!!
i need some crack gum