What teacher surveys say about merit pay vs. class size

An editorial in Saturday's NY Times argues, as others have, that the new merit pay proposal to be implemented in 200 low-performing schools “represents a good first step toward the goal of attracting teachers to the most challenging schools — and keeping them there.”

The argument that the chance of a $3,000 bonus will draw teachers to low-performing schools is dubious. There is at least an equal chance that through no fault of their own, such a school will get a failing grade on the new progress report, be further stigmatized – and eventually closed. Why wouldn’t teachers be responsible for a school’s low grade?
First of all, the new reward system as well as each school's grade will be based largely on one year's test scores alone -- highly unreliable, statistically speaking. Moreover, many factors out of any individual teacher's control, such as class size and overcrowding, will not be considered in the assessment of his or her performance -- or a school's grade, for that matter.

In North Carolina, educators were polled from throughout the state to find out what would be the most effective measure to attract teachers to work in low-performing schools. The number one response was lowering class size, with 83.7% of teachers and 83.1% of administrators replying that this way, far outstripping any other proposal, including providing salary enhancements --which came out at number five. 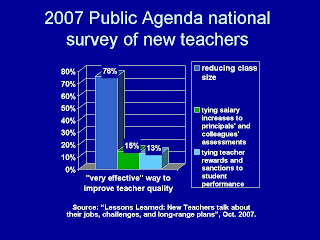 A just-released Public Agenda survey found that 76% of teachers say that reducing class size would be a "very effective" method to improve teacher quality, compared to fewer than one in six who believed that tying salary increases to their students' performance would be. (You can click on the chart to enlarge it.)

If the administration were really serious about enticing teachers to work in our most challenging schools, and keeping them there longer, it would immediately cap class sizes at reasonable levels. As the Times editorial points out, this would be a better way to improve student achievement in these schools as well:
"At the same time, school officials would need to make bigger changes — like cutting class sizes and improving support services — if they want to make real headway in improving student performance."
Posted by Leonie Haimson at 10/22/2007 12:18:00 AM

Personally, I like money, but 3,000 bucks a year is not going to induce me to cross bridges or whatever to move to a troubled school. Also, the plan calls for only 20-40% of schools to receive this. We'll see what evolves when Bloomberg and Weingarten move on to greener pastures.

But class size is a huge thing for me. As an ESL teacher, I've had the opportunity to teach smaller classes, and the difference is incredible. I spend less time discipling and more time teaching. There are fewer calls to be made. I can turn my eyes toward kids on the verge of trouble and avert it instantly.

It's a shame there are so many demagogues in the city who talk about class size and deliver only meaningless PR that advances their careers while doing nothing for kids.

I spent two decades in a low performing school. Now that I've transferred to a much better school, there is no way I'd sacrifice my peace of mind for a measly $3000. I wouldn't do it for 20 grand, so the current proposal is an insult.

I worked very hard for those kids for those twenty years, at a lot less salary than I am making now. I put in as much effort then as I do now, and it has nothing to do with money. Teachers teach because it is what we do--very few just 'mail it in' and those that do wouldn't work harder for such a pittance.

Now, if you gave me classes capped at 20 and an additional stipend, well, then I'd seriously consider it.