Book Review: Catching Up or Leading the Way 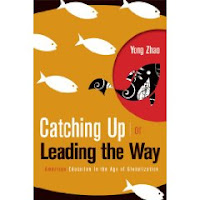 Yong Zhao occupies a unique position from which to reflect upon the current national direction of American education in his recent--and very readable--book, Catching Up or Leading the Way. Mr. Zahoa, a University Distinguished Professor in the College of Education at Michigan State, is also a product of the inquiry-suppressing, conformity-inducing, national-standardized-test-driven system that constitutes Chinese education. These two seemingly antipodal perspectives alone offer more than ample reason to listen to Mr. Zhao's voice, all the more so when he argues that both systems are moving, each in their own way, toward becoming more alike.

The crux of Professor Zhao's analysis appears in his preface. "...What China wants is what America is eager throw away--an education that respects individual talents, supports divergent thinking, tolerates deviation, and encourages creativity; a system in which government does not dictate what students learn or how teachers teach; and culture that does not rank or judge the success of a school, a teacher, or a child based on only test scores in a few subjects determined by the government...An innovation-driven society is driven by innovative people. Innovative people cannot come from schools that force students to memorize correct answers on standardized tests or reward students who excel at regurgitating dictated spoon-fed knowledge...why does America want to adopt practices that China and many other countries have been so eager to give up?"

Professor Zhao begins by attacking the myth of the broken American education system and the ostensible government reforms that have sought to address the problem. He argues that the historical strength of America's education system can be found in its promotion of talent diversity and the value of the individual, explaining in clear terms the distinction between "contest mobility" and "sponsored mobility" systems. In the latter, as typified by China and Great Britain, students "are subject to path-defining examinations and tests early in their life and are sorted accordingly toward the forms of schooling and training that are deemed 'appropriate' to their perceived talents...." He follows this discussion with a chapter entitled, "Why China Isn't a Threat Yet," one of whose subheads, "High Scores but Low Ability" captures perfectly everything I have personally seen and heard about the products of the Chinese education system (including an abysmally low level of post-school personal reading or interest in new learning, unless it can be turned directly into increased income -- knowledge for knowledge's sake is a concept largely inconceivable among Chinese mainland adults).

Professor Zhao is highly critical of NCLB and the damage to American education he perceives ensuing from it. He does not pull his punches in this arena, most amusingly so when he cites President Bush's January 8, 2002 signing of the NCLB enabling legislation at Hamilton High School in Ohio. Two years later, Hamilton was branded a failing school under the provisions of the same law.

Catching Up or Leading the Way closes with Professor Zhao's prescriptions for American education. I found myself in agreement on most -- increased global knowledge and cross-cultural competency, more foreign language skills, digital competence, nurturing of individuals' diverse talents, focus on students' strengths and not just on their "deficiencies," and broadened measures of accountability for school performance. I am less enthusiastic a proponent of what the author terms personalized learning. Instead, I prefer offering as wide a range as possible of artistic, cultural, physical, vocational, and academic electives and programs as the best means of personalizing learning, encouraging intellectual exploration, and cultivating individual talents, interests, and passions.

On balance, Yong Zhao's book is a valuable addition to the discussion of America's badly misguided (in my judgment) education reform movement. He brings a refreshing, international perspective to the debate, and he does so in a manner that is clear, easy to understand, and requires no extensive background to follow. Catching Up or Leading the Way is an easy book to recommend as essential reading to those who scratch their heads wondering what we are doing to our public education system and perhaps even more so, why.
Posted by Steve Koss at 1/10/2010 10:18:00 AM

This is an excellent book, and a must read for all educational stakeholders.

I especially found interesting the section where Yong Zhao shows how standardized testing has infected China's culture with detrimental effect.

God help us if it takes us 1400 years to see that centralization and standardization of curriculum, assessment, or anything for that matter does nothing but stifle creativity, initiative and ingenuity.

Great post, and thanks for the book recommendation. We need to expose this and show politicians that these other countries want the very aspects of American education that more testing and standardization is driving out: creativity, student voice, and personalization in learning.