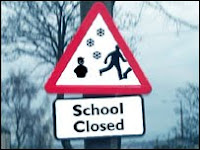 January 29, 2010 (GBN News): NY City Schools Chancellor Joel Klein plans a trip next week to earthquake-ravaged Haiti, in order to see for himself the effects on the country’s school system, sources have told GBN News. Mr. Klein was said to have been struck by the fact that 97% of the schools in the capital of Port-Au-Prince were destroyed, and he was hoping to see if he could replicate the situation in the New York City schools.

The Chancellor, who sat through hours of angry testimony at this week’s PEP meeting opposing his plan to close 20 city schools, has been trying to find a way to close schools without having to face thousands of hostile parents, teachers and students. “An act of God is the only way to do this,” Mr. Klein was said to have told aides. “You never hear about the Almighty having to face a bunch of rabble without even being able to check his Blackberry or go to the bathroom.”

J. Fredrick Runson, professor of Education at Manhattan University, said that while it may seem that the Haiti solution is a bit drastic, the public here may not see much of a difference. “After all,” he told GBN News, “if he’s trying to destroy the NY City schools, he’s already accomplished most of that goal.”
Posted by Gary Babad at 1/29/2010 09:13:00 AM

He's doing the destruction without an earthquake. Bloomberg is nYC's own natural disaster.

It is scary even if this is a spoof story. Who'd have thought that these two would had done this much damage. Thank you Randi for the support, HA!