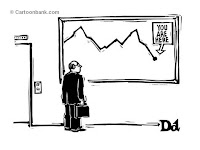 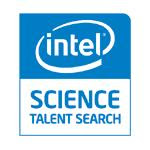 On Wednesday, January 13, the Intel Science Talent Search (STS) program made its annual announcement of the science fair’s 300 national semifinalists. What was once a source of immense pride in NYC, worthy of peacock-preening stories about the city’s impressive number of young future scientists and, by implication, the quality of NYC public schools, in the NY Times, Daily News, and Post went by unnoticed and unmentioned yesterday.

That the Intel semifinalist list merited not such so much as a passing notice, not even from the ever-churning DOE P.R. machine, tells you all you need to know about the news. It wasn't just bad, it was all-time level bad.

NYC public schools hit their lowest point in the last thirteen years (and certainly much more), based on available data going back to 1997, with just fifteen semifinalists this year. All but one come from Bronx Science (5) and Stuyvesant (9), with Queens H.S. of Science at York College being home to the city’s only other public school award-winner. There were also four semifinalists from NYC private schools: two from Brearley and one each from Ramaz and St. Francis Prep in Fresh Meadows. Congratulations to all nineteen of these outstanding young people. 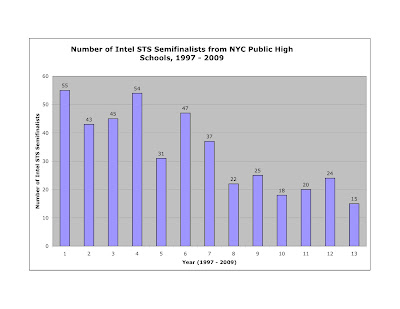 In the six years before Chancellor Klein, the public schools averaged 46 semifinalists per year; over the period 2003 – 2009, that figure has now plummeted by half, to 23. Even worse, the number of NYC-based semifinalists coming from the non-specialized science high schools has dropped from an average of 18.2 (1997-2002) to just 6.33 (2003 – 2009), and the average number of non- specialized science high schools hosting semifinalists has fallen correspondingly from 5.67 to 3.33, this year hitting an all-time low of just one.
With the lone exceptions of Stuyvesant and Bronx Science, NYC public high schools under the leadership of Joel Klein and Michael Bloomberg have virtually disappeared from the national science achievement map. The result is hardly surprising given this administration’s educational priorities and their obsession with standardized tests and measurable accountability.

Lest anyone think this pattern is simply reflective of larger NYS trends, it should be noted that the NYC private school average number of STS semifinalists during these two time periods declined slightly from 6.50 to 5.86 and the NYS average (including NYC schools) went from 155.8 to 129.4, a decrease of 26 semifinalists that almost exactly matches the fall in NYC public schools’ number of semifinalists.

This near-collapse in Intel STS performance, long touted with pride as a measure of the quality of NYC’s public high school public education, has come entirely under Mayor Bloomberg’s watch and his seizure of public school control; in 2002, the last year before mayoral control, there were 47 public school STS semifinalists originating from nine different schools.

The numbers themselves are stunning, but equally stunning is the utter, year-after-year failure of the local print media to inform the public as to what has happened. Their reticence on this is more than a little disturbing, culminating this year with total silence on the results, not even granting the traditional congratulatory nod to the students who made the cut and the schools that supported them. Perhaps the news was so disappointing for Mayor Mike that Messrs. Sulzberger, Zuckerman, and Murdoch simply forbade its mention. Regardless, the silence has now finally reached the level of deafening.

The trend that you described does not hold for the number of Intel Science Talent Search finalists.

To JackPo: In no way am I suggesting using Intel SES as a measure of school performance per se, for many reasons. However, it is impossible to ignore the extraordinary dropoff in NYC schools' performance on Intel and its exact coinciding with mayoral control. There's too little space here to get into why this has happened, but I believe it's a direct result of current DOE policies under Klein. The worst indicator, in my mind, is the huge falloff in the number of schools who are participating in Intel and/or garnering semifinalists. NYC public schools are now almost just down to Bronx Science and Stuyvesant, a far, far cry from the pre-Klein years. In the end, you have to look at Intel STS as just one more symptom of a greater and deeper illness.

This is just what Himmler(klein) wants! He wants to show and prove that public schools and their UFT teachers are failures! HE DOESN'T CARE!