Parents and teachers sue the city over increases in class size

On Tuesday, Class Size Matters joined with the UFT, the NAACP, the Hispanic Federation, and parent leaders from the Bronx and Queens, to sue the Chancellor and the Department of Education for flouting the law and refusing to reduce class size.
Here are some news clips: City bungled bid to lower class sizes: suit (Daily News) Teachers sue city (NY Post); City Ignoring Law on Class Sizes, Suit Says (NY Times); After years of complaints, union sues city over class size dollars (GothamSchools); Lawsuit accuses NYC of ignoring class-size law (AP); Teachers Sue NYC for Smaller Classes (Courthouse News Service). Good video at Teachers sue DOE over class size (Channel 7 news) and Education Groups Sue City Over Class Sizes (NY1).
Despite a state law passed in 2007, requiring that the city lower class size in all grades, and despite being granted over $750 million of state funds to be used for this purpose, class sizes have gone up dramatically in the last two years.
This fall, class sizes made the biggest jump in eleven years -- as far back as we have reliable records. 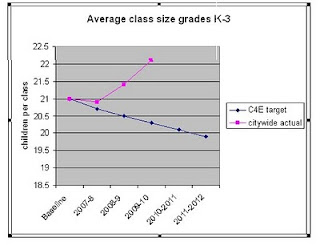 The DOE and the Chancellor have committed fraud on NYC children by refusing to provide them with the smaller classes that the state's highest court said would be necessary for them to receive their constitutional right to an adequate education.
They are also violating the trust of taxpayers, by failing to use hundreds of millions of dollars for the critical purpose they were intended.
As Michael Mulgrew, the president of the UFT said, “Three-quarters or a billion dollars later, tens of thousands of New York City students are packed into classes that are higher than anywhere else in the state. Who is managing – or should I say mismanaging – this process?”
Currently, Kindergarten class sizes are the largest they have been since the 1999-2000 school year; and 1st through 3rd 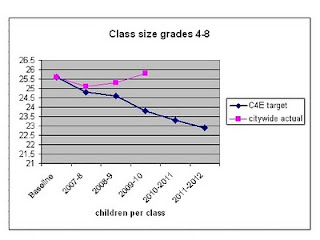 grades class sizes are the largest since the 2001-2002 school year.
Smaller classes continue to be the top priority of parents, according to the DOE's own surveys. This is no surprise, considering our students are crammed into the largest classes in the state.
Not only have average class sizes risen substantially; but so have the number of students in very large classes, as these charts attest.
In District 11 in the Bronx, more than 52% of all Kindergarten students are in classes of 25 or more, according to the DOE's own class size data.
District 24 in Queens is not far behind, at 47%. 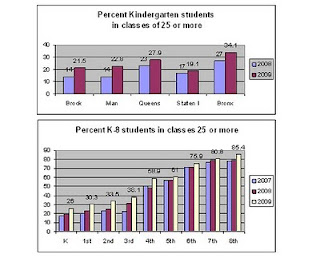 Nearly one quarter of high school students are in classes of 34 or more (and we believe that this underestimates the actual size of high school classes in most schools.)
See the UFT press release here; the Class Size Matters summary, with more charts, including those for high school, here.
Also you can check out my affidavit in the case, the legal petition; and the memo of law.
Posted by Leonie Haimson at 1/06/2010 07:37:00 PM