An even more punitive approach for our poorest schools, but with a nicer name? 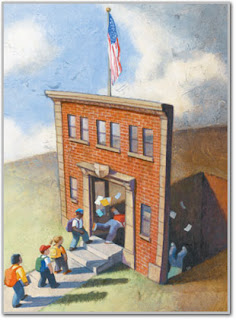 Today’s article in the NY Times on Obama’s plan to revamp NCLB might fool the uninitiated that the administration’s proposals will help solve the myriad problems that NCLB helped create – too many schools labeled as failing, too much emphasis on standardized testing, and the use of harsh accountability measures that hurt rather than helped improve learning conditions at our public schools:

The proposals would require states to use annual tests and other indicators to divide the nation’s nearly 100,000 public schools into several groups: some 10,000 to 15,000 high-performing schools that could receive rewards or recognition; some 10,000 failing or struggling schools requiring varying degrees of vigorous state intervention; about 5,000 schools that would be required to narrow unacceptably wide achievement gaps; and perhaps 70,000 or so schools in the middle that would be encouraged to figure out on their own how to improve.
That clears it up. The Washington Post and AP stories are a bit more understandable.

Rather than 100% student proficiency, the new proposal would have as its goal “college readiness” (as taken from the current emphasis of the Gates Foundation.) Schools and teachers would be evaluated on the basis of test score gains rather than absolute standards.
Here, from the AP story is the “spin” from the administration, of a supposedly less punitive approach:
In the proposed dismantling of the No Child Left Behind law, education officials would move away from punishing schools that don't meet benchmarks and focus on rewarding schools for progress, particularly with poor and minority students.
Yet what the administration is really proposing is even more punitive, to expand the pro-privatization and destabilizing policies represented in its "Race to the Top" slush fund, including school closures, charter takeovers, and/or supposed “turnaround models”, where at least half the staff would be fired, to all of the nation’s lowest performing schools, or else risk having their Title one funds being withheld:
…the bottom 5 percent of schools would be forced to use the department’s four turnaround models that now govern the Title I School Improvement Grant program. The next-lowest 5 percent would be on a “warning” list and be required to take action using research-based interventions, although the department would not mandate one of the four turnaround models.
The Title one program was originally created to try to equalize funding for poor schools. But these proposals, if adopted, would apparently be provided only to those schools that put into place the administration’s heavy-handed “reforms”. Again, here is the AP summary:
…. for the first time in 45 years, the White House is proposing a $4 billion increase in federal education spending, most of which would go to increase the competition among states for grant money and move away from formula-based funding.
Valerie Strauss of the Washington Post accurately portrays the proposed changes this way:

The lowest achieving 5 percent of schools in every state will be punished even harder than under NCLB, according to my colleague Nick Anderson, who reported about the Obama plan today….. Obama today promised to treat teachers “like the professionals they are.” What Obama and Duncan have in store for teachers makes one wonder just how they think professional teachers should actually be treated.
….. standardized test scores of students [would be linked] to teacher performance evaluations and pay. That means that all of the other factors that might go into a student’s test score — whether they are tired, or hungry, or can’t see well, or have a toothache, or were distracted in class, or have test anxiety, etc. — don’t actually matter.

None of the distorting effects of basing teacher or school evaluation on standardized test scores alone will diminish under this system, even if they are now “value-added” measures, and in fact, would likely grow even more extreme, especially for our neediest schools.
Ignored are the significant methodological problems of fairly basing evaluations on value-added test scores, as pointed out by the National Academy of Sciences and other experts, who have warned of the unreliability of such measures, and their potentially damaging consequences.
In apparent response to complaints that the overemphasis on scores in reading and math in NCLB has driven out other parts of the curriculum, according to the Times,“the administration says it will allow states to test subjects other than math and reading and use scores on those tests to rate their schools, though it will not require states to do so.”
That’s generous of them.
Nothing here is likely to achieve the goals that the administration supposedly has to attract experienced, quality teachers to work in our lowest performing schools; in fact, they would be likely to leave in droves, given the increased risks of being judged on unreliable test score gains and/or losing their jobs.
What else? Oh, yes, Duncan will change the name of the program:
“Duncan has said the name No Child Left Behind will be dropped because it is associated with a harsh law that punishes schools for not reaching benchmarks even if they've made big gains. He said the administration will work with Congress to come up with a new name.”
Any nominations for a new name, folks?
Posted by Leonie Haimson at 3/14/2010 03:59:00 PM

Let's call it, "The Education Policy Of A One-Term President"

I was going to say, "No Scapegoat Left Behind," but I'm kind of partial to Pogue's contribution.

Obama and Duncan want the name changed because they think people will be fooled into believing the punitive measures of NCLB are gone if the name to the law is changed.

Or No Child Left Behind Jr.

Or Obama's No Child Left Behind.

The point is, all the worst provisions from NCLB - the testing, the punitive measures - remain or have been made worse by President Obama.

It's great that Obama is okay with being a one-term president because I sure am not going to vote for him again. We might as well have a Republican in the White House. I've never heard of a Democrat who applauds the firing of working people and is anti-union. Tell me again what change he was talking about? Hillary in 2012!

How about calling it the "Still Testing Unispired Pupils Into a Daze" (STUPID) act?

I'm still sticking with Pogue. If Obama has managed to alienate someone like me, who's never voted against a Democrat in my life, I don't see how he gets a second term. I think Democrats will take a bath this year, and I don't even feel bad about it.

In a sense, we'd be voting for the Chaos Party, so that neither side has much power to harm its constituents. Because, right now, we are getting hit hard and attacked by "supposed" friendly fire.

NYC Educator is so right! I am a die-hard democrat.

So here's my rap so education does not get slapped

But with Obama in the house
he made this ol'mama hate the louse!

It's time to make him A One-Term President.
Because I have rights as a USA resident!

If education to Barack is lacking,
Then Barack will not get my support and he should go packing!

Obama, you can take your NCLB and stick it up your political ass..essment!

It's amazing how the OBAMA administration is so creative at creating new labels for the same shi.... policy's. How about just keeping it simple and educating the neediest of students, instead of holding hardworking-good teachers accountable. Maybe the American people should deduct presidential pay for a messed up economy and a disaster of a healthcare system.