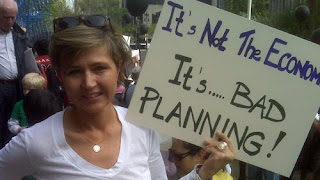 Yesterday, the DOE announced that there are over 3,000 children on waiting lists for Kindergarten next year; 42 percent more than last year.

About a quarter of the city's elementary schools, or 157, have kindergarten wait lists. An excel file with school by school data was posted by InsideSchools.

In 2006, for PlanNYC, the Mayor’s taskforce was asked to come up with recommendations to prepare every area of the city’s infrastructure for 2030, when they projected there would be a million more New Yorkers, including the need for more water supply, transportation, sewage treatment, police, libraries, etc. etc. But the much-praised plan did not have a single word to say about schools. In fact, the only mention of schools in the plan was a proposal to convert school buildings to more housing.

In October 2008, we released a report, predicting that there would soon be sharp increases in enrollment citywide, due to the rising birth rate, rampant residential development, the closings of parochial schools, and the growing perception that NYC was a more family-friendly city. The MPB and the City comptroller did their own studies, showing the failure of the DOE to build enough seats to accommodate the population explosion to come.

We urged them to expand their new five year capital plan, and nearly fifty elected officials from the city, state and federal levels signed onto our recommendations.

Instead, they cut the seats in the capital plan by 60%, since their consultants claimed there would be no citywide increase in enrollment till at least 2016! Sure enough, citywide enrollment started to increase in 2009, just as we had warned.

This has been a slow-moving disaster waiting to happen and they paid no attention, and now the disaster is here.

To the contrary, every DOE policy has made overcrowding worse, including co-locations, where they have continued on their reckless course of squeezing more and more schools into existing, overcrowded school buildings, each of them eating up classrooms to create more cluster rooms and administrative spaces.

Rather than focus on creating enough new seats, the DOE plans to spend more than $500 million next year in the capital plan on new technology, to expand online learning and enable new computer-based tests.

This is yet another disaster waiting to happen, given the city's deplorable cost overruns with technology projects. See my comments in Gotham Gazette, this NYT article , and a recent Times post breaking down the millions of dollars in online learning contracts that have already been approved by the PEP– including half a million for a technology consultant, to consolidate the use of technology consultants!

Clearly, the DOE is hoping for the day when they do not have to provide any new teachers or classrooms, because all the “learning” will take place online. We cannot let this go forward without a fight.
Posted by Leonie Haimson at 3/31/2011 02:00:00 PM

can't we get a little birth control here? Oh wait, is that a bad thing to say?

I thought Bloomberg was allowed to buy his third term by claiming to be a good business manager who planned for the future. He can't blame this disaster on anyone else. The schools are out of space and he's run out of scapegoats. He's exercised iron-fisted control over the DOE since 2002 so can't blame his predecessors, he controls the NYC agencies that gave his developer friends the permits they needed to build all of the family-friendly luxury housing that made the school-age population explosion inevitable, he argued against a millionaires' tax surcharge that would provide funding for more school seats, and his administration gave away millions (maybe billions) to consultants in no-bid contracts to make sure there would be no money left for important things like facilities, teachers, and books.