Check out my official comments to the DOE below on the proposed school closures, co-locations and grade expansions to be voted on tomorrow at the Panel for Educational Policy.

This includes a discussion of the effect of these proposals on the availability of CTE/vocational seats and programs, the likely impact on overcrowding and class size, and other reforms which should have been considered before closing these schools, especially class size reduction.

Click on the charts showing  very large class sizes at some of the schools slated for closure -- including Gompers, Jane Addams, Grace Dodge, Manhattan Theater Lab -- and never given any support from DOE or a  real chance to improve before the Mayor decided to close them down.  There are more charts in the document below. 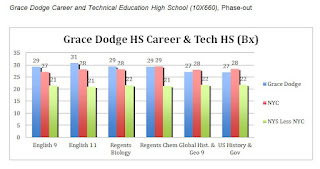 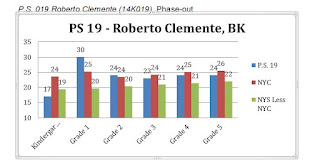 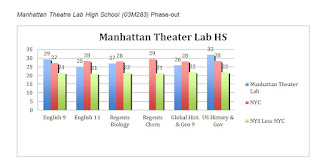 They don't care about parents,children or education. The vote is a forgone conclusion. Close the schools and open up more space for his buddies charter schools. They never tell you how closing a school improves the education of the children involved.

Wish I could join you at my alma mater, as I cheer you on from Wisconsin. I can imagine your frustration-- the PEP maintains a charade of public input, while everyone knows that they have already made up their minds and will follow Bloomberg's edicts.

The schools should not be closed. I'm a retired teacher who taught in the N.Y.C. school system for 33 years.
Unfortunately, the UFT must share responsibility for the decline of education. It has been controlled by Unity Caucus for over 50 years. These people have been out of the classroom for so long that they have forgotten the rigors of classroom teaching.
The mayor was emboldened by the fact that Unity is constantly giving up hard fought items from previous year. To a vulture, this is a sign of weakness and therefore the mayor is going for the jugular.
There is money for fancy parades, and bonuses for teachers. While we spend money on this, Teachers' choice money is gone, class sizes are burgeoning, the city refuses to heed our cries for the restoration of the 600 school concept for unruly youngsters. Teachers are being excessed in record numbers and are being relegated to substitute status. Imagine, the DOE is now observing these teachers. How can you be observed when you don't even know the names of the children? This is ridiculous. Where is the union? Why didn't the UFT endorse Bill Thompson? What kind of deal was made with the mayor for the union to keep quiet during the last election?

We need a committee of active and retired teachers running our schools. Having served in the trenches, they know quite well what students and teachers need in order to succeed.
We also need term limits for UFT officials. We are way past the time for new blood and another group leading the union. Unity Caucus has repeatedly failed us.
The state legislature must revoke mayoral control. It has been an abysmal failure, but so has Unity Caucus.
Parents need to be included in the decision making process. Ed Greenspan, retired NYC teacher. BA, M.S., Brooklyn College Author of the previous comment listed as anonymous.

Where was Unity Caucus when the DOE began appointing principals from The Leadership Academy. These people never taught but are observing and rating teachers. I would resent taking orders from such people.
The mayor didn't care. He appointed Cathie Black, who knew absolutely nothing. How come her car nearly went up a tree last summer? I wonder if she saw the movie-"I'll Cry Tomorrow?" Ed Greenspan-Retired NYC teacher. B.A., M.S., Brooklyn College. Taught in Districts 21 and 17.

Mr. Walcott's claim to fame as challenge was that he headed a day care center for 2 years. Sir, that doesn't qualify you to be chancellor. You are nothing more than a Bloomberg yes-man who will bow to the every wish of the Emperor.
To protest the actions of this mayor, teachers must do the following. They can't be reprimanded for violating the contract if they:
1. Refuse to teach in summer school. 2. Not go in during the month of August to decorate rooms for the new year. The DOE sees this as weakness on your part. 3. Not pay one cent from your pockets for school supply. Make good with what the school gives you. When the school looks shabby, this will further embarrass the administration. Should you go into school before the term starts and are injured, you will not be able not to have your days deducted. You weren't injured on the job because you didn't have to report. As always, Unity Caucus fails to notify the membership of this. E. Greenspan-retired NYC teacher-B.A.,M.S., Brooklyn College. Taught in Districts 17 and 21.