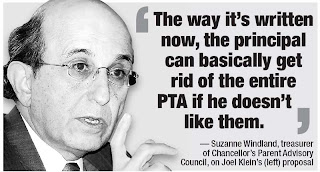 Today, the NY Post reports on a Bloomberg administration plan to allow principals to remove PTA leaders for a pattern of "negative behavior". The Post quotes three parents on the proposed policy change:

CPAC Treasurer Suzanne Windland: "The way it's written now, the principal can basically get rid of the entire PTA if he doesn't like them. What's negative behavior? A voice a principal doesn't want to hear? A parent who rants and raves about something he or she finds unsatisfactory? That needs to be extremely clear."

Leonie Haimson of Class Size Matters (and blogger here): "No one at DOE should be allowed to determine who parents elect to represent them. Tweed officials or principals are likely to abuse that power and make accusations against parents simply because they are strong leaders."

Monica Ayuso, a PTA president in Queens: "This is saying parents don't have any brains to make their own decisions."