The parent voice, censored from the parent survey 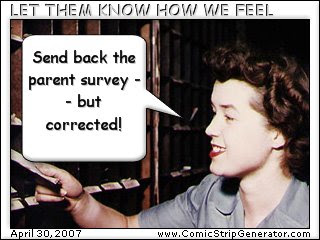 Today, the DoE will send home a survey in backpack mail and by snail mail, for parents to fill out about their schools. Last week, many parents who participated in the focus groups that were supposed to help design the survey sent a letter of protest to Schools Chancellor Joel Klein, pointing out how our concerns were censored from the survey. (see our letter dated April 26, and the Chancellor's reply.)
Now, we are calling on all parents to boycott the survey, cross out the questions listed, and before sending it back, write “We want real parent input – as well as smaller classes, less testing, and new priorities at Tweed to deal with the real problems in our schools.”

Class size, testing and test prep, the principal’s attitude towards parents, and the functioning of school leadership teams were all key issues for us and the other focus groups whose results we were shown. Despite this fact, none of these issues will have individual questions dedicated to them in survey.

Rather than admit that these are key concerns, the Chancellor responded to our letter that they were merely “one or another of the many hunderds (sic) questions that were proposed.”
Instead of including questions about the issues parents really wanted addressed, there are many that seem designed to put the blame on us, if our children are not receiving a sufficiently individualized education.

In any event, since the parent survey will account for at most only 3-5% of a school’s grade, the results will continue to deny us the ability “to exercise the kind of voice and influence over our schools that every parent, secondary student, and teacher in the City deserves,” as the Chancellor claims. Yet again, this is simply another PR offensive by Tweed, to try to show that they really care about what parents think when the reality is otherwise.

We deserve far better. Parent voices and views have again been stifled– even when it comes to the parent survey itself.
Please, send the survey back corrected – so that Tweed hears how we really feel.

UPDATE: Bloomberg lashes out at parents who criticize survey. See our new post with links to press coverage.
Posted by Leonie Haimson at 4/30/2007 10:07:00 AM

Few weeks back It was insisted by a vice principal that she fill it out for me.(forgot my glasses)I was afraid to say no.
Of course I was not honest in my answers so the school looks good according to "my" survey!