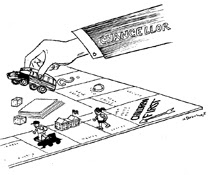 April 23, 2007 (GBN News): Game developers at Parker Brothers have been working feverishly to keep up with a myriad of new rule changes for their board game “Children First: A Game of Irony”, based on the NY City school system. To keep the game as realistic as possible, the rules already allow the player designated “Chancellor” (similar to the banker in “Monopoly” but more powerful and less trustworthy) to change the rules at any time while the game is in progress. But Parker Brothers has also been trying desperately to put together an up to date set of written rules for players to start the game off with.

Pressure has been so intense to keep up with the constant reorganizations at the DOE that there are reports of increased drug abuse among Parker Brothers creative staff, mostly amphetamines and antipsychotic medications. The difficulties in keeping the board version up to date have even led the company to discount the computer version, which can be updated on line, to encourage people to buy it instead. The price of the computer version had been $80,000,000, about the cost of an ARIS computer system, but can now be pre-ordered for a mere $75,000, the approximate cost of a DOE lounge renovation.

GBN has been attempting to keep our readers abreast of the latest modifications, but this has been virtually impossible, as anyone having anything to do with the city school system already knows. In the last week alone there have been at least two major changes:

• A rule change: If you are a “Principal”, when you pass “Go”, you may collect an extra $25,000, if the Chancellor feels like it, for no apparent reason.
• A new card: The Mayor confuses your “UFT” card with an “NRA” card. Go directly to jail for possession of a “dangerous weapon” - a cell phone.

This is true! here is an excerpt from today's press release re the contract agreement w/ the CSA:

The current Performance Increases will be replaced by a bonus system whereby the Chancellor, in his/her sole discretion, may award bonuses of up to $25,000.

Life imitates art - or is it the other way around?