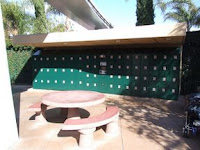 April 29, 2007 (GBN News): Controversy continues to rage over the NYC Department of Education plan to construct lockers where students can store cell phones and other dangerous weapons outside the school. Parents, teachers, politicians - in fact just about everyone besides Mayor Bloomberg and Chancellor Klein - have attempted to convince the DOE to overturn its ban on cell phones in NYC schools. The Mayor and Chancellor have held their ground, blaming cell phones for everything from gang warfare to acne, but the DOE did propose the locker plan as a possible compromise.

While parents and other critics have been skeptical as to whether the locker plan is feasible, the DOE has been enthusiastic about the possibilities. A senior DOE official, speaking on condition of anonymity, spoke to GBN News about the advantages of the plan.

The official told us effusively that the locker plan has “something for everyone”, and will make the schools safer. “For students”, he said, “it’s a place to store items like electronics and drugs, without fear of being caught with them in the school.” He went on to say, “And it will also keep theft out of the schools. Why steal stuff in school, when it will be like a regular shopping mall outside? All they have to do is to watch as kids take out their expensive stuff, decide what they want to purloin, and go for it! And for every theft outside the schools, that’s one less we have to worry about inside.”

The DOE official continued, “Even the wireless phone companies will benefit, when kids need new phones because the old ones got damaged from the cold or dampness outside. And that’s not only good for the economy but the students will be happy too. What kid doesn’t want to get a brand new phone every few weeks?”

When it was suggested that some of the so-called “benefits” could actually increase the risks and costs to the students, the official said, “With this locker plan, dangerous items like cell phones and weapons are taken out of the schools and put back out on the streets where they belong. Let nobody say the schools didn’t get safer on our watch.”

In another move that is certain to be controversial, the DOE is considering requiring teachers as well as students to store their cell phones in the lockers. Mayor Bloomberg has reportedly become concerned about what he views as the similarity between the United Federation of Teachers and the National Rifle Association. The mayor was said to have insisted on extending the plan to teachers because, as he paraphrased the NRA motto, “If outlaws have cell phones, only cell phones will be outlawed”.
Posted by Gary Babad at 4/29/2007 11:04:00 PM

When I told my 16 yr. old about this proposal, her reaction was - what will happen when it rains, because you know they are doing to use "crappy stuff" to build them and who is going to sit outside all day and watch the lockers so no one breaks in? If a 16 yr. old can see these why can't BloomKlein?????