Charter schools: no child left behind? 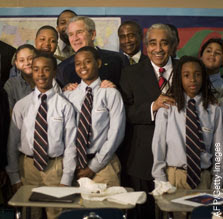 The President's plane landed in Central Park yesterday, so that George Bush could visit a charter school, the Harlem Village Academy. There, he promoted NCLB, which encourages charter school conversions. Clearly, charter schools are a big part of the Bush education agenda, as well as a top priority for Bloomberg and Klein.

Most charter schools do offer smaller classes, and this tends to be their most attractive aspect for parents and teachers. In the April newsletter put out by the US Dept. of Education, called the Achiever, a charter high school in Chicago is featured at length, including an extended interview with a teacher named Ellen Metz:

"A key factor in running Noble Street productively has been reducing the class size. Metz-whose largest class is 23 students, a stark contrast to her previous school where 45 students filled one class-says the smaller class size enables teachers to give more individualized attention, which is particularly critical in urban schools where a student's needs can be great."

Charter school advocates also argue that their schools lead to improved outcomes throughout the public school system through emulation of their successful practices- including, most notably, smaller classes. Check out this power point from the NY State Charter School Institute.

Yet here in NYC, the same administration that promotes the proliferation of charter schools continues to deny the value of smaller classes in the regular public schools. Moreover, the rush to establish more charter schools in NYC has ironically hampered the ability to reduce class size throughout the system.

As the administration insists on cramming these schools in already existing school buildings, where each one eats up valuable classroom space with new administrative and cluster rooms, it either causes class sizes to grow in the pre-existing public school, or makes it that much more difficult to achieve smaller classes in the future.

The best quote about Bush's visit is in Newsday -- from a parent of a child who attends a regular public school in the same building:

He's only here to help the kids at the charter school; he's not helping my child," Edith Jackson, 37, an unemployed mother of an 11-year-old boy who attends school in the same building that houses the charter school, but doesn't have access to the same amenities. "Get them computers; get them a music teacher, and art," she said.

She said she was also upset that almost none of the parents from her son's school had been invited to hear the president, but that many from the charter school were allowed in.

There are plenty of examples of NY charter schools who are quite candid about the importance of smaller classes. The Ross Global Academy, located in Tweed Courthouse itself, touts small classes as the first factor in building a "Solid Foundation of Skills". Meanwhile most Manhattan schools have 28+ kids in a class. If public schools were allowed to have the small classes and enrichment programs offered at charters, the demand for charters would evaporate.