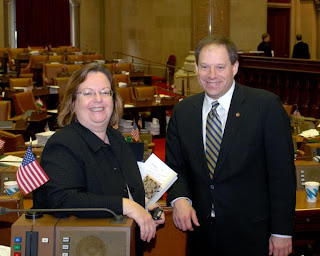 Late last night, we won our battle to ensure that NYC must use part of the additional state education aid to reduce class size in all grades.

I haven’t seen the exact language yet, but this represents a great victory for our children -- and we owe the Chair of the Assembly Education Committee, , Assemblymember Lancman, and Governor Spitzer tremendous thanks for their leadership on this issue.

It will be up to Commissioner Mills to write the rules and what the class size goals should be, so this remains a work in progress.

Nevertheless, we can all be proud of the campaign we waged together to convince the Governor and our legislators to do the right thing for our kids – despite the fact that the Mayor, Chancellor and their minions were trying to block this every way they could. Indeed, the administration's lobbyists even told legislators that they already had plans to reduce class size so there was no need for a state mandate -- even though it is clear to us here in NYC that they have no such intention.

Now, we will all have to watch them like hawks -- to see that the plan they submit is realistic and will lead to significant progress -- and that they adhere to it. If past experience is any guide, they will try to dissimulate, manipulate, and evade their obligations to reduce class size in any way they can.

The Mayor and Chancellor should instead look to for an example. When that state's voters passed a constitutional amendment to require smaller classes in all grades in 2002, then-governor Jeb Bush was caught on tape saying that he had "devious plans" to subvert the will of the people.

Bush tried not once, but three times to overturn the amendment, and each time was foiled by the Florida State legislature, which while dominated by members of his own party, resisted his efforts because the class size amendment proved even more popular when it was put into place than when it originally passed, and turned out to be considerably less expensive to fund than expected. The last time Bush tried and failed to overturn the class size amendment, this was widely hailed as the most humiliating political defeat of his career.

Over the last three years, class sizes have been dramatically reduced in all grades, by about six students per class in Kindergarten through third grade, five students in fourth through eighth grades, and two students in ninth through 12th grades. For the 2006 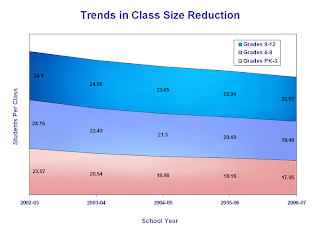 Now Florida has a new Governor, also a Republican, Charlie Crist, who wholeheartedly supports the class size law, even as the state moves towards actual caps in all schools of no more than 18 students per class in grades K-3, no more than 22 in 4th -8th grade, and no more than 25 in high school.

Here is the latest statement from Gov. Crist on this issue: "the will of the people was to do what was passed, and I think we should respect it."

Listen to that Michael Bloomberg and Joel Klein, and beware!!!

New card for the “Children First” game: A “Leonie Haimson/Class Size Matters” card. If you draw this card, you get to organize all the other players and thwart the “Chancellor’s” nefarious plans.

thanks Gary! But until they figure out a way to exile all of us to Tajikstan or somewhere equally remote, we must stay fully vigilant and organized.

The game is not over until it’s over, as Yogi Berra would say. But it’s a very good time to take a seventh inning stretch and celebrate!

Let's hope if they do mandate reduced class sizes that they also do something to help ensure that the instruction teachers are providing is effective. Without that, class size matters little, if at all.

What I know from my limited view is that I was thrilled to have my kids in a school with huge class sizes and not in many surrounding schools that had small class sizes. The poor performing school had lots of room because no one wanted to go there! Our best performing nyc schools are overcrowded, yes, but they are performing. Could they perform better with reductions? Sure. Is that really the largest issue facing our system? Absolutely not. This is a distraction.

Actually, the research shows that all teachers are more effective in smaller classes, both skilled teachers and those less so. In surveys, teachers and principals respond that the best way to ensure quality teaching is to reduce class size.

Furthermore, here in NYC the biggest obstacle we face in terms of our teaching force is our high attrition rates, of up to 20% or more. Reducing class size will lower these rates, leading to a far more experienced and effective teaching force in NYC.