Bush: Our Children Is Learning 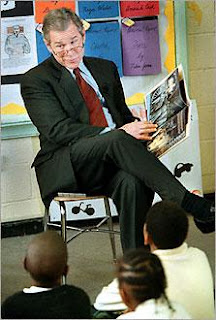 April 25, 2007 (GBN News): President Bush, looking to promote renewal of his signature "No Child Left Behind" law, paid a visit Tuesday to a charter school in Harlem. In a display of bipartisanship, he was joined by Schools Chancellor Joel Klein and Harlem Congressman Charles Rangel, both Democrats. The President referred to Mr. Rangel as “A true leader of the Harlemonians”. He also praised Chancellor Klein’s school cell phone ban, saying, “I’m here in this school, I have no cell phone, and as you can see, I’m perfectly safe.”

In a scene reminiscent of the leadership the President demonstrated during 9/11, Mr. Bush spent time reading to some of the children. Unlike that previous episode, there were no annoying interruptions as he read “My Pet Goat” to one of the classes. Mr. Bush did appear to stumble over some of the words, but second grader Stacey Burton gave him a pass. “He tried his best, really”, she said, “but I guess he doesn’t get to read much in that job he has.”

The President repeatedly emphasized the importance of standardized testing under NCLB. In his remarks, he stated, “I said before I was President the most important thing I said in my Presidency. I said, ‘Rarely is the question asked, “Is our children learning?”’ And you know, with all the steak we have in Texas, I know something about rare. And learning can’t be rare, so we test them. I may be the Decider, but I’m also the Tester. And I’ll put the whole country to the test before I’m done. I’m not leaving that to the next President.”

Mr. Bush went on to say, “This is a charter school. We’re talking about school choice here. School choice - that means schools get to choose, right? They’re the Deciders. I mean, I’m the Decider, but so are they. And they can decide to let in the kids that when we test them, they’ll get the highest scores. So the school does well. That means the kids is learning, and that’s a good thing.”

The President and Chancellor also announced a new public/private educational initiative, called the “Summer Work/Study in Iraq Program”. Sponsored jointly by the NY City Department of Education, the City Parks Department, and Halliburton, this will provide a combination summer job and learning experience to select high school students. The program will be provided under a 30 year contract, which Mr. Klein said will guarantee that "Though most of Randall's Island may only be available to private school kids, I can assure you that all of Iraq will be available to our public school children through the year 2037.”
Posted by Gary Babad at 4/25/2007 01:41:00 PM