Why do teachers flee our schools? 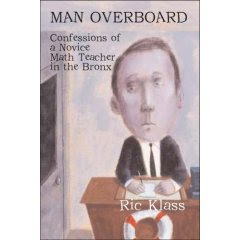 Two articles about Ric Klass’s book about teaching in a large Bronx HS, “Man Overboard: Confessions of a Novice Math Teacher in the .” Ric, a former aerospace engineer and investment banker, decided what he really wanted in life was to teach in the NYC public schools, but lasted only one year, largely because of the problems he faced in reaching all his students in huge classes. See the Rye Record interview with Ric here:

“He does hold out some hope for schools that spend their money on smaller class sizes. “Given the discipline issues, the teacher will only get their attention when there are about 15 students in the class. Small schools, such as those being promoted by the Gates Foundation, are not the answer; it's smaller class sizes.”

And today’s Education supplement of the NY Times features a review of several teacher memoirs , including Ric’s and another by Dan Brown, a former filmmaker who was assigned to an elementary school in the Bronx, “The Great Expectations School: A Rookie Year in the New Blackboard Jungle” to be published in August.

In both, the authors describe their unwieldy class sizes as their most insurmountable challenge. Both fled the public school system and are now teaching in elite NYC private schools where no classes are larger than 15 students.

Ric’s story, in particular, puts the lie to Klein’s claim that we cannot reduce class size because of the shortage of qualified math and science teachers. If we could provide them with smaller classes, more people like Ric – who had all the right credentials, including degrees from MIT and Harvard Business School -- would hang around longer and we’d have a more qualified teaching force. It’s the attrition rate – not the lack of applicants –that doom so many of our students to less effective and experienced teachers.

Here is an excerpt from the review:

“In practically all the foxhole memoirs there is a common villain: standardized testing, which the authors agree has been so overemphasized that it is now an obstacle to the very education it was supposed to measure. And there is a common, if nearly impossible, remedy as well: smaller classes, more resources. Mr. Klass stumbles on this partly by accident when he is asked to take over a group of special ed students and discovers that they do much better than his other classes, simply because he can give them more time.”

Apparently, even those who acknowledge that reducing class size is the key to improving our schools believe it to be a remedy that is “nearly impossible” to achieve, as in the case of the reviewer. This shows that the biggest challenge we face may be changing people’s minds about what is and what is not possible.