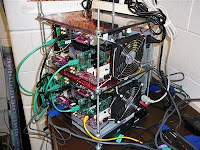 July 26, 2009 (GBN News): A powerful supercomputer, which has been monitoring school performance in New York City to the tune of $80 million, is slated to make its national debut under Secretary of Education Arne Duncan, GBN News has learned. According to sources at the US Department of Education, ARIS (Achievement Reporting and Innovation System) is being procured by the feds from IBM to provide data for the Education Department’s $4 billion Race to the Top stimulus initiative. The computer’s reported $2 billion cost will cut by half the money actually going the schools under this initiative, but is said to be an essential data collection tool without which the program could not be effectively administered.

ARIS, as anyone involved in the New York City schools knows, keeps track of virtually every aspect of students’ school performance from test scores to rest room visits, and thus has the capacity to evaluate teachers and schools based on students’ progress. The new nationwide ARIS system will be modeled after the one used in New York City, and because of its powerful data capabilities, will give the Education Department unprecedented control over the country’s schools.

Through a unique agreement between IBM and Research In Motion Limited, makers of Blackberry, all ARIS data will be seamlessly channeled directly into Secretary Duncan’s own Blackberry device, allowing the Secretary to monitor all of the nation’s schools in real time. This will enable what the Secretary calls a “dynamic stimulus disbursement process”, whereby with the push of a button Mr. Duncan can give out or take away funding for anything from a single school to an entire state. For example, if a school receives stimulus money one day based on the previous day’s test scores, the same school could lose that money the next day if too many rest room visits waste valuable prep time.

A source close to Secretary Duncan told GBN News that the Secretary was able to win President Obama’s agreement for this unusual level of government control of the nation’s schools by capitalizing on the President’s Blackberry addiction. By selectively passing on information to the President ‘s Blackberry from his own, the Secretary was able to convince him of the efficacy of reforms such as merit pay based on test scores and expansion of charter schools, despite evidence to the contrary.

J. Fredrick Runson, head of the Political Science Department at Manhattan University, warns that ARIS could give Mr. Duncan an unusual level of influence for an Education Secretary. “In fact,” Professor Runson told GBN News, “Duncan could end up being the Dick Cheney of this Administration. With ARIS, he will not only control voluminous amounts of data, he’s already shown that he can use it to dupe a President who, on every other issue, prides himself on being in command of the facts. I’d keep a close eye on that fellow.”
Posted by Gary Babad at 7/26/2009 01:34:00 PM

The description of the president is a tad off-putting. Federal control of all important elements (medicine, economy, education, etc) of society is a goal. As one who has noticed his dissembling in regards to a government takeover of the medical system I have no doubt as to his aims for the government and the education system. Tenure will be swept away in the name of 'good' government. Local control will be a vestige of the past in his brave new world where the federal governement knows best in medicine, education, economics, etc etc.