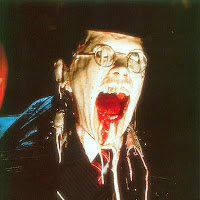 July 17, 2009 (GBN News): The hottest day in two months apparently caused a verbal meltdown on the part of Mayor Michael Bloomberg today. The Mayor was quickly hustled into his air conditioned limo, but the damage appeared to have been done. Mr. Bloomberg, said by observers at the scene to have been “practically foaming at the mouth”, lashed out at the State Senate’s failure to pass a Mayoral control bill. The Mayor called Senators out by name, accused legislators of setting up a slush fund to train parents to disrupt the schools, and demanded that Governor Patterson use the State Police to “drag [the legislators] back” in order to approve the bill.

Even his usually sycophantic aides were worried about the Mayor’s bizarre behavior, and one even went so far as to call the Mayor’s 100 year old mother in the hopes that she could calm him down. “The Mayor gets cranky in the heat,” this aide told GBN News on condition of anonymity. “Sometimes it takes Mommy to get him to stop his tantrums.”

The Governor, meanwhile, in an apparent attempt to demonstrate his political strength, said that he would emulate Mr. Bloomberg’s own policing techniques. “I won’t just have the cops drag them in,” Mr. Patterson told reporters. “We’ll set up metal detectors and ban their cell phones.”
Posted by Gary Babad at 7/17/2009 05:08:00 PM

there is no governor patterson in NY. there is however a governor paterson. oh, and this one was also not funny. you are batting 1.000 in that department "garry".

You've stumbled upon a story that GBN News has not yet had a chance to publish. It seems that the Governor is so unpopular that he added an extra "T" to his name in the hope that he would not be recognized.