The Taking of the White House 123 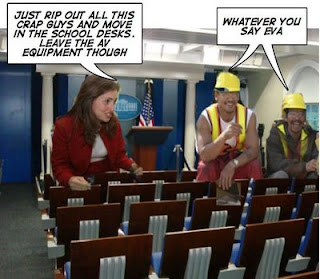 July 8, 2009 (GBN News): Mayor Michael Bloomberg is secretly working with former City Council member Eva Moskowitz to put a charter school in the White House, GBN News has learned. According to sources at City Hall, Ms. Moskowitz, who has been aggressively expanding her charter school empire in Harlem by taking over space in existing schools, will use similar tactics in the Executive Mansion.

To assist in this effort, Mr. Bloomberg has reportedly enlisted the services of North Korean leader Kim Jong Il. The sources said that this week’s massive cyber attacks, which have crippled many Government web sites, are indeed, as suspected, the work of the North Koreans. Their intent, though, is not military, but rather an effort to distract the White House and Secret Service while Ms. Moskowitz moves classroom equipment into the Lincoln Bedroom.

While on the surface it may seem surprising that the North Korean dictator and Mr. Bloomberg would collaborate on such an endeavor, the Mayor and Mr. Kim actually have much in common. Both, after all, are eccentric autocrats with a taste for the arts, and both benefit from a tightly controlled, adoring press. And because Mr. Kim so admires the way Mr. Bloomberg controls the city schools, the Mayor persuaded James Liebman to resign as DOE Chief Accountability Officer, in order to build a similar accountability system in North Korea.

It is unclear what role, if any, Education Secretary Arne Duncan has played in this plot. He is said to think highly of the NY City school reforms of Mr. Bloomberg and Chancellor Joel Klein, and has aspired to replicate them nationwide. A White House charter school would seem to be right in line with this goal. However, he might also risk alienating his boss, if President Obama finds that a charter school in his midst hampers his ability to do his job.

On the other hand, some feel that this is just what Mr. Bloomberg intends. If he can do to Mr. Obama what charters do to public schools, the Mayor may end up displacing the President in the functional equivalent of a coup.