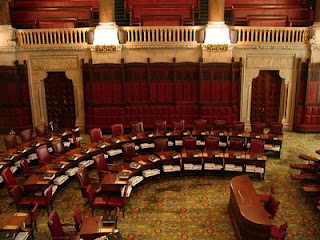 July 17, 2009 (GBN News): New York State Senators were shocked this morning to find, just before adjourning for the summer, that they will now be sharing space with a charter school. The seats of many of the Senators were removed overnight and replaced by classroom desks, and a giant blackboard took the place of the podium. Furthermore, in what seemed to be an unusual coincidence, all of the desks that were replaced belonged to Senators who opposed Mayoral control of the NY City schools, while Mayoral control supporters apparently found their seats still intact.

GBN News has learned that former City Council member Eva Moskowitz was behind the abrupt conversion. Emboldened by her success in placing a charter school directly under President Obama’s nose in the White House, Ms. Moskowitz was said to feel that she could further expand her charter school empire, while simultaneously currying the favor of her patron Mayor Bloomberg by undercutting opposition to Mayoral control in the Senate. She reasoned that if she put charter school seats in place of those of the opposition Senators, the remaining Senators would unanimously pass a bill identical to that of the Assembly to renew Mayoral control for another six years. And should any Senators subsequently dare to oppose any of Mr. Bloomberg’s school reforms, they would immediately be replaced by charter school students.

Mayor Bloomberg immediately lauded the arrangement. “The Senate was not doing its job,” the Mayor said in a statement. “But thanks to this new school, we will now add control of the State Senate to Mayoral control of Sheldon Silver, and we can finally turn around these failing institutions.”

While Ms. Moskowitz was said to have originally intended to name the school after Senator Frank Padavan, who sponsored the Senate version of the Mayoral control bill, this plan ran afoul of a law stating that a school cannot be named after a living person. Instead, it will be called “The Albany Success Academy at the Frank Padavan Senate Chamber”.
Posted by Gary Babad at 7/17/2009 02:14:00 PM

It's a good post and i came to know about charter school. :)

I got this term from one my client and I just find it in google and got your blog....