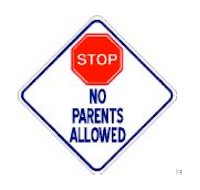 July 20, 2009 (GBN News): Declaring that “Schools are for children”, Mayor Michael Bloomberg announced today that effective this September, parents will be banned from all NY City public school buildings. At a City Hall news conference, the Mayor told reporters that children should be able to learn without distractions, and thus parents will only be allowed to enter the buildings after school hours, and then only in designated areas for PTA functions such as bake sales.

While he justified the new restrictions as essential to children’s learning, sources with knowledge of the Mayor’s thinking told an entirely different story. Mr. Bloomberg, they said, is certain that public school parents are behind the Senate gridlock which has stalled renewal of Mayoral control of the schools. “The Senators who oppose us can’t be that stupid on their own,” the Mayor was said to have told his aides. “They must be listening to those parents. Parents are trying to disrupt the schools. That’s why I said democracy has to stop. We can’t have the voters telling their representatives what to do.”

Some political observers said that the timing of the parent ban could overshadow Mr. Bloomberg’s rumored upcoming announcement that, as a cost saving measure, he will cancel this November’s Mayoral election and declare himself the winner. Others, however, contend that the two measures were intended to go hand in hand, and that by sowing suspicion of the democratic process, the Mayor can blunt much of the potential opposition to the cancellation of the election.

In a related story, a City Hall spokesperson tried to explain that Mayor Bloomberg misspoke when he appeared to compare the State Senate with the Nazis. The Mayor had been strongly criticized after he seemed to indicate that negotiating with the Senate was akin to Neville Chamberlain appeasing Hitler. “The Mayor actually was referring to New York Yankee pitcher Joba Chamberlain, not Neville,” the aide said. “He was merely making the point that you can’t negotiate with the Red Sox.”
Posted by Gary Babad at 7/20/2009 10:40:00 PM

"We can't have voters telling the representatives what to do"? huh? Canceling the election and declaring himself the winner? Banning parents from schools?! End to Democracy? I feel like I am in an alternate reality..he can't be serious...

It's a good decision. They need sufficient time and environment to learn. Parents will enter in the class hours and they will disturb them. It's a good and tough decision.

Philosopher Mayor: In light of the fact that, as we know, the Mayor has reflected long and deeply on his own education, his ultimate ambition here is surely to accomplish the sensible and efficient model envisioned in Plato's Republic: pooling the children and raising them in common according to rational principles. Let's get rid of those meddlesome parents altogether!

TTTT and IELSTS ireland -- this is parody; though very much in the spirit of other comments and actions taken by the mayor recently.

TTTT and IELTS must be Teach for America cadets.

No wonder they can't stand parents, since they've been raised in the laboratory! That may explain why they are so mechanical, stiff and so much like micromanaging machines. And children and teachers are now expendable1 teachers can be replicated at cheaper prices. The statistics can be changed here and there! Everything is subject to reorganization and nothing is untouchable nor beyond restructuring! Now their heartlessness can be understood!

If parents are being banned from schools because of their involvement with the senates and the mayoral control, will he tell principals not to allow teachers to have their lunch period for supporting Thompson? NEW YORK CITY PLEASE WAKE UP! Bloomberg has lost his billionaire marbles if he truly implements this in September! It is understandable that they are a few parents who may get in the way of teachers doing their job, but I said a FEW! The majority of parents who are committed and involved in their child's education are wholeheartedly welcome in their schools. Because of the parent's effort to help their child succeed in school, teachers are able to teach to this child and see the child grow emotionally and academically. Here's why it takes a village to raise a child, except if the village is owned by Bloomberg. Then the village is mostly burned down by Bloomberg's pyromaniac, Klein.

i am especially OK with banning the contributors to this blog from the schools.

Ya i also agree with the decision that parents must be ban into the public school classes.. They must be diturbing the whole environment of the class while teachers deliver the lesson to the students.. So its a good decision..