What Frank McCourt could teach Joel Klein or Arne Duncan 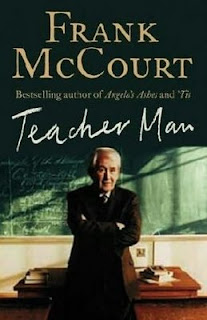 Frank McCourt died yesterday. He was a wonderful writer, and very unsentimental about the teaching profession. He taught in NYC high schools for thirty years and wrote a book about his experiences called Teacher Man. His insights would be very valuable to Joel Klein or Arne Duncan, if they would have ever listened.
Check out this interview from 2005 on WNYC radio:
Leonard Lopate: “If you were named Schools Chancellor what would you do?”
Frank McCourt: “I’d certainly go to Albany and get more money for the teachers’ salaries…and I’d cut the school day and certainly cut the size of the classes, because they’re monstrous. And I've have a parliament of teachers, no supervisors and certainly no politicians."
He also mentions, heartbreakingly, how the huge teaching loads in NYC schools meant that he had too many students and too little time to develop real relationships with any of them.
When one or two students first asked him to have coffee, at first he said yes, but he soon learned that he just wasn't able to get to know them– with 175 students each semester.
He bemoans the lack of respect for teachers -- how hard they work, how little their opinions and professionalism matter to elected officials; and how their views are never heeded about how schools could be improved.

Indeed, in national surveys, over 90% of teachers regularly respond that the best way to raise the quality of education would be to reduce class size – over every other strategy proposed, including increased salaries, merit pay, professional development, or anything else.

And yet the powers-that-be always criticize this view as somehow merely reflecting self-interest, rather than in the best interest of the children as well. They never make the same attack on merit pay or increased teacher salaries, somehow -- just the one proposal that would directly improve classroom conditions and the ability of children to learn.
If 95% of doctors year after year proposed a certain reform as the best way to improve our medical system, would they be brushed off so easily? Not likely.
I remember a great speech McCourt gave at the UFT spring conference in 2006--- telling a packed audience at the Hilton a hilarious story about how he was once so overwhelmed with all the homework he had to correct that he threw all 175 student papers into a dumpster.

He also went on at some length about how elected officials and top administrators never listen to teachers, but unfortunately by that time, all of those who had been there, including Joel Klein, had left the room.

See also this interview from 2005:

McCourt: ... Teachers here are treated like second-class, third-class, fourth-class citizens. They're told to come in the back door. ....This is all a matter of class and status, and maybe snobbery. And the figures go along with this -- the lousy pay they get and the lack of respect.
When did you last see a teacher on a talk show? Movie stars and athletes and politicians -- criminals! They all get on the talk shows. But not the teachers. They are regarded as dull people. The ones who take care of the children every day. Almost like super babysitters. That's the way they are treated.
And then when you do see something on television, a panel on education, you see someone from the board of education, you see a professor of education, or you see a bureaucrat, someone from a think tank, a politician, but never a teacher. Never. Imagine a panel on medicine without a doctor? The uproar there would be from the medical profession!
But all the politicians think they own education. Just the way the pope and the cardinals think they own the [Roman Catholic] Church. Which they do, of course. We don't get the keys. The politicians have the keys to the educational system, they control the purse strings, and they don't have a clue about what education is. I know they've been to school and all themselves, but what goes on in the classroom is another story.
Posted by Leonie Haimson at 7/20/2009 12:37:00 PM

McCourt was taking about student load, not class size.

No one has a class of 175. The number of papers teachers have to grade are simply a function of class size. Whereas class size and student load are virtually the same thing at the elementary level, they are quite different at the middle and high school levels.

McCourt was talking about a problem that secondary school teachers must deal with, and twisting his intentions to support your crusade is inappropriate.

When you confuse these two issues, you lose potential supporters. If i felt you were truly a thoughtful advocate of reducing student load, I would back you. But it is far from clear that you even understand the issue.

I didn't twist his words; you did. He himself described NYC "class sizes" as monstrous; do you think he didn't understand the meaning of these words and got them wrong by mistake?

Moreover, McCourt was the honorary chair of NYers for Smaller Classes, our coalition's campaign to set mandatory smaller classes in schools throughout the city. And I could cite lots of other interviews in which he mentioned the importance of class size.

Do you really insist that only student load is important; and not class size? If so, you are arguing that the interactions and instruction that occurs during class time don't matter.

I am deeply grateful for any posting about Mr. McCourt as a teacher-- if he had never written his books, he would still be cherished by generations of students. I want to shout from the rooftops (and have posted to a few blogs) the great irony of the praise given Frank by Mayor Bloomberg. Bloomberg's tightly micromanaged, test-obsessed classrooms would never have allowed Frank to thrive as a teacher, and have had the unique effect that he had on the thinking of countless students.