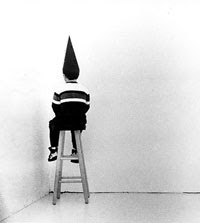 Today's editorial in the New York Times, called So Much Unfinished Business, urges the State Senate to grant Mike Bloomberg a renewal of his complete authority over public schools. It urges passage of the Republican sponsored bill without amendment. But the editors simply don't have the right facts. They cite how the bill will "create 32 district superintendent jobs designed to focus on parents’ issues". District superintendents have always existed in the law and have significant responsibilities defined there including the supervision of principals. The Bloomberg administration eviscerated their authority by assigning them data coaching responsibilities that take them far from their home districts. For example, one Manhattan superintendent even told me she was expected to spend significant amounts of time at Coney Island school. Another told me he can't even go into schools without getting permission.

Superintendents should have an important role supervising, mentoring our many inexperienced principals, resolving issues unique to communities, planning and advocating for school construction and repair, working with schools on curriculum and teaching practices, etc. But the bill under consideration does little to restore the authority of superintendents. It simply says they should be "predominantly" in their districts and have "sufficient" staff. Nothing in the toothless language of the law will change the role of superintendents, especially with regard to resolving issues of concern to parents and students.

There are certainly insights to be gained from reading the Times editorial. It confirms that those arguing most forcefully for renewal of mayoral control, the wealthy publishers of the city's old media, have no idea what transpires in public schools because they don't send their own children there.
Posted by Patrick J. Sullivan at 7/15/2009 07:52:00 AM

As it happens, I just read the editorial and was thinking the very same thing. The Times may not have the reflexive right-wing bent of the tabloids, but it's had the worst education reporting of all the city papers on a fairly consistent basis.

Often, when I read the nonsense the Times prints about education, I have to wonder whether their mainstream news is as inaccurate and poorly researched.

You are absolutely correct, the role of the superintendent has been marginalized by the current DOE. The Times is behind the Times on the issue of mayoral control. Bravo to Mr. Sullivan and all the other advocates for New York City Public Schools.

NYC Ed - You make a good point. I've thought Javier Hernandez has done a great job reporting on education but he and the other reporters can only be undermined by editors who don't know what a district superintendent is.

Anonymous - Thanks for your kind words. The marginalization or outright loss of top administrative talent from the system is a distressing story that isn't getting the exposure it should.

What can we expect from the New York Times? I don't even bother reading it anymore when it comes to education news.

Just to clarify, I wasn't directing this at Hernandez in particular, who's done some good things and may eventually break the time-honored tradition of spouting whatever nonsense City Hall produced.

I remember the Times complaining of how the UFT took the week off in February, inconveniencing parents. Unlike every working teacher, the Times reporter didn't know the city was fighting for teachers, but not students, to come in that week. I've also seen purported news stories that analyzed the supposed motivations of UFT leadership.

You expect that sort of thing from some of the tabloid writers, but not from the Times. In fact, though there are some writers I don't like, I've seen very good reporting in the tabloids, even the Post, and over the years it's been far more substantial and effective than that of the Times.

The Times had a great ed. columnist in Mike Winerip, and another one in Sam Freedman, but by the time Freedman really seemed to get good, he was gone.

Why isn't the mayor angry at the senate for stiffing tenants in this city. Supposedly, the tenants were supposed to get help from the state senate. Instead, tenants get nothing. Obviously, the mayor isn't annoyed about this because his crony friends, the landlords, continue to make tons of money. There is no one out ther to help tenants. Our politicians just pay tenants lip-service.
As for the schools, mayoral control is a joke and everyone knows it. Class sizes are not improving and the mayor and chancellor refuse to do anything about that as well as bringing back the 600 school concept for disruptive pupils. The latter don't need longer days and years since they're already bouncing off the walls as the school day proceeds.
We need work-study programs for older difficult students.

Why I Don't Love Mayoral Control:
A snowstorm hits and the chancellor closes the schools at 5:45A.M. when students and staff are already on the way to school.
Bus schedules changed during the 3 coldest weeks of a particular winter. Bloomy and Klein should have had a test run in warmer weather.
People running the schools have no education background. Why isn't it being investigated that Klein taught for 6 months and ran?
Bloomy talks about our kids in the schools. Neither of his daughters ever attended a N.Y.C. school. What was he afraid of? They should witness the truth regarding what goes on.
Committees of active and retired teachers and supervisors should be running the schools. These are the people who know what is going on.
Despite mayoral control, the Department of Education is still entirely too topheavy with teachers and administrators who have nonsensical jobs. Let's get all licensed pedagogues and supervisors back into the classrooms where they belong. Right now, they're hiding behind paper work that could be easily handled by a secretary.
Thanks to no more seniority transfers, it's back to the system that you have to know someone to get a transfer.
Once he hopefully leaves the chancellor's job, Joel Klein should commit to teaching in one of our many SURR schools for a period of 5 years. That period would be reduced to 3 years if he would leave the chancellorship now.