Today the office of Manhattan Borough president Scott Stringer released the results of an online survey of over 1000 education stakeholders, including parents, teachers and principals. As a group, class size and school overcrowding were their greatest concern.

Reducing class size has been the top priority of parents, year after year, on t 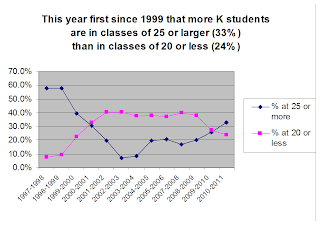 he DOE’s own parent surveys. And yet class sizes have risen sharply the last three years, and now are larger, especially in the early grades, than they have been at any time in more than a decade.

Meredith Kolodner wrote an excellent article about the class size crisis in Kindergarten, quoting Kenneth Sampson, father of a daughter in a Kindergarten class of 30 at PS 298 in Oceanhill-Brownsville in Brooklyn, where only 19% of children are at grade level in math:

"The teachers are good here, but my kid's not getting the attention she needs...I think there's not enough commitment to it. They gotta get it right so the children can learn properly. These are very smart kids. They want to learn."

As another parent said, in response to MBP Stringer's survey:

"You can have a perfect curriculum and a perfect teacher, but if there are 30 kids in the class, then you don't stand a chance of your child actually getting a good education,"

See the chart above; showing that the number of large Kindergarten classes plunged from 1999-2002, under Chancellors Crew and Levy; until the Bloomberg/Klein regime took hold, and then started to rise again.

This year is the first since 1999 in which there are more Kindergarteners in classes of 25 or more than 20 or less. 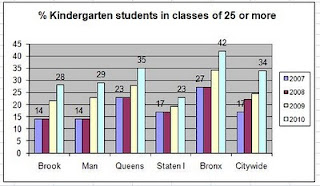 Also see the chart to the left showing the sharp rise of children in large Kindergarten classes over the last three years; now 42 % of these children are in classes of 25 or more in the Bronx -- the city's poorest borough.

Cathie Black said she intends to take the concerns of parents seriously. She sent her own children to schools where class sizes average 12 students per class.

Research is crystal clear that class size, especially in the early grades, is a major determinant in a child’s success in school and in later life. This is especially true for poor children, who benefit twice as much as middle class children from small classes. We have seen the class size situation stagnate and now grow steadily worse, under a Mayor and chancellor who claimed to care about the achievement gap and who had total control over our schools.

If Cathie Black cares about improving opportunities for NYC children, she will make absolutely certain that class sizes do not further increase under her watch, but begin to decrease instead.